Will Labour back $15 minimum wage?

The unions want the minimum wage lifted to $15 an hour, two thirds of the average hourly rate, restoring the historic ratio. The Greens, New Zealand First, The Progressives (I think), the Maori Party* and, oddly, the Kiwi Party are also calling for $15 an hour. Will Labour join them? 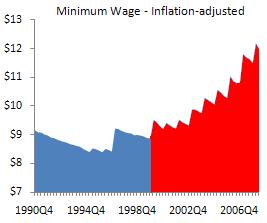 Labour has an excellent record on the minimum wage. After 9 years in which National let inflation eat into the minimum wage, one of the Labour/Alliance Government’s first actions in 1999 was to lift the minimum wage. It continued to do so every year since (albeit with more prodding from the unions than should be necessary). The minimum wage is up from $7 an hour to $12 an hour since 1999. That’s an after-inflation increase of 40%. Along with the full employment policy, it is an important reason why incomes for low income families have increased under Labour after falling under National.

With tough economic times ahead, it is important we protect the wages of the lowest paid workers and ensure the fruits of production are shared with the most vulnerable, not hoarded by the owners of capital. There are about 100,000 workers earning the minumum wage and many more very close to it. About 450,000 workers would be directly affected if the minimum wage were lifted to $15 an hour today. Hundreds of thousands earning a little more than $15 an hour would also get knock-on pay rises. If the minimum wage is not lifted those workers will probably not get pay increases.  Lifting immediately to $15 would put $50 million more a week into New Zealand’s poorest communities but would have an inflationary impact of about 1.5%. The captialists’ argument that increasing the minimum wage leads to unemployment has not been borne out in the real world but a sudden lift of $3 an hour during an economic downturn could be too much too quickly. For these reasons, I would guess cautious Labour will back a $15 minimum wage but introduce it gradually, prehaps over the course of three years, rather than one. [figures from DoL]

Labour and the Left are committed to lifting the minimum wage and looking after the most vulnerable workers.  National is not. National MPs, including Labour Relations spokesperson Kate Wilkinson, have opposed the minimum wage’s existance, let alone lifting it. Key has made some soothing sounds but refused to make any commitments.

If Labour has the courage to back $15 an hour and campaign on it hard they will place a stark choice in front of more than half a million workers and their families. Vote Left and get higher wages to help you through the tough times ahead or vote National and see the well-off protected while your standard of living falls.