Wind power is (too) successful?

You sometimes have to wonder about headline writers sometimes (including myself). But take a look at this one from Bloomberg.com, a site with a focus on investment.

RWE AG is a power utility and wind farm operator in Germany. The reason that they’re getting reduced prices for power is because they and other wind-farm operators been driving down power prices in Germany with their volumes of power generation on windy periods.

On windy nights in northern Germany, consumers are paid to keep the lights on.

Twice this year, the nation’s 21,000 wind turbines pumped out so much power that utilities reduced customer bills for using the surplus electricity. Since the first rebate came with little fanfare at 5 a.m. one October day in 2008, payments have risen as high as 500.02 euros ($665) a megawatt-hour, about as much as a small factory or 1,000 homes use in 60 minutes.

The wind-energy boom in Europe and parts of Texas has begun to reduce bills for consumers. Electricity-network managers have even ordered windmills offline at times to trim supplies. That hurts profit for wind-farm operators…

This has caused the electricity prices to be set to negative occasionally when the power generation from wind becomes too high and they’re trying to get rid of the generated power.

One solution is more investment in transmission systems to move power from northern Germany wind farms to heavy industry in the south, he said. ‘Power transmission is the bottleneck.’ 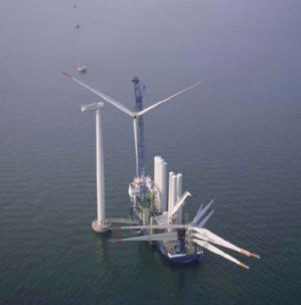 This is much the same issue as we have here, albeit at a smaller scale. We don’t have a convenient adjacent larger grid to push power into as the Danes (for instance) do to Germany. However we do have a long skinny country with wind blowing in different locations at different times. Being able to use renewable energy sources like wind or tide to pump power into our grid means that we can conserve the baseload generation of hydroelectrical dams.

The most obvious issue is the bottleneck in the antiqued cables between the North and South Islands. But most of our transmission grid is getting a bit decrepit because of under investment and has to be carefully managed in its flow patterns. My understanding is that our grid really isn’t suited for taking sudden bursts of power from wind in one part of the country and feeding it to another part of the country. It needs upgrading to take power from erratic sources.

Instead of transmitting and getting end-users to consume the excess power, there are alternative techniques to store power. If the power is surplus to current needs, then it can be converted into gravitational potential at even relatively low efficencies.

Storing electricity may be another fix. In Scandinavia, Danish wind power is used to pump water into Norwegian and Swedish reservoirs and later released to drive hydroelectric plants when the wind is not blowing.

The low marginal costs of wind power and other renewables is transforming economies.

Spanish power prices fell an annual 26 percent in the first quarter because of the surge in supplies from wind and hydroelectric production..

Wind power is pretty relatively cheap to install and maintain and is getting cheaper overall. One report that I read said that last year, the price of turbines of equivalent power had dropped by over 15% in a year on the back of reduced commodity price levels during a recession. The same applies to most power generation equipment. But this means that the most cost-effective time to install new capacity is in recessions, like now. Also have a look at a post ” by Bryan Walker at Hot Topic.

Of course all of this takes imagination, forward planning and and some thought. It is a pity that Gerry Brownlee as Minister of Economic Development and Minister of Energy and Resources clearly isn’t up to the any of these tasks. Instead he seems to be fixated on mining and burning coal, a process that will carries increasing costs in the future to discourage greenhouse gas emissions.