2.1 Times More Likely to get a pay rise…

If you still wonder WHY anyone would want to join a union, the fact that union members are 2.1 x more likely to get a pay rise might make you wade through the anti-union propaganda.

Some unions escape scorn, like the Police Union which is referred to as an Association (its legal name – just as one of the “Teachers Unions” is the Post Primary Teachers Association ). It’s probably an oversight though, not anything deliberate…

There are more to Unions than just getting pay rises, they also work on representation in company restructures, safety in the workplace and so on. Unions have tried to hold the Government’s feet to the fire over Health and Safety, by way of example.

Here is an extract from the the  CTU’s monthly economic bulletin by Bill Rosenberg which addresses inequality in pay;

This looks at the latest data on collective employment agreements, showing again that people who are part of a collective do better in pay rises, and unionisation’s effect on inequality.

We often assume that because unions go some way to levelling the playing field for people who rely on wages and salaries, they help to reduce income inequality. In July, International Monetary Fund researchers published a study providing strong evidence that is right. It finds that deunionisation was associated with increasing income inequality in the 20 high income countries that it analysed including New Zealand.

They find that higher unionisation reduces inequality not only in low to middle incomes before tax, but also by reducing the share of the nation’s income that top incomes have acquired. Further, they find evidence that it reduces inequality in after tax incomes by influencing policies such as increased top tax rates and stronger social security systems. In other words unions are a powerful force for social progress.

They find that New Zealand is at an extreme in deunionisation increasing inequality – but also near the opposite extreme in the positive effect of the minimum wage in reducing inequality. Financial deregulation is also associated with rising inequality while technology plays a relatively modest role.

Comparing the new data on collective employment agreements (CEAs) to the Labour Cost Index (LCI) for all jobs shows that in the year to June 2015 the LCI rose 1.6 percent overall, the same as wages in CEAs, the private sector LCI rose 1.8 percent, considerably lower than the 2.3 percent rise for CEAs, central government LCI rose 1.1, just higher than CEAs (1.0 percent), and local government rose 2.1 percent, again considerably lower than the 3.0 percent for CEAs.

What will Labour do, I hear some shrill?   Where better than a Memorial Lecture for the Late Margaret Long to find out? 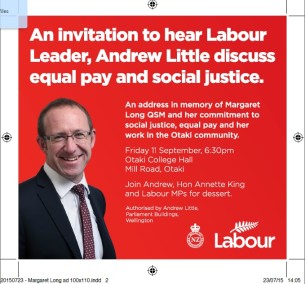 New Zealand dairy farmers bracing for the lowest payout in a decade probably won’t welcome the latest analysis of global trends in the industry – their counterparts in every other dairy-producing country are being paid more.