Is Syria the first failed state because of climate change? 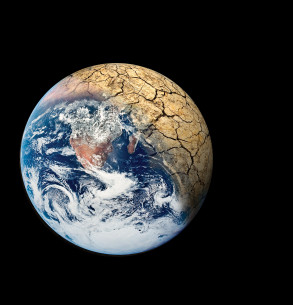 I thought I would write another post about Syria in part because the banality of the flag debate is driving me insane. If the All Blacks win the world cup I expect National’s polling to surge again and the silver fern to be adopted.  But thinking about the world’s current problems this is the most trivial of issues.

I have read a bit more about Syria and it appears clear that we may be witnessing the first nation to fail because of climate change. This comic started me thinking about this blog post. And this New York Times article provided verification.  From the article:

Drawing one of the strongest links yet between global warming and human conflict, researchers said Monday that an extreme drought in Syria between 2006 and 2009 was most likely due to climate change, and that the drought was a factor in the violent uprising that began there in 2011.

The drought was the worst in the country in modern times, and in a study published Monday in Proceedings of the National Academy of Sciences, the scientists laid the blame for it on a century-long trend toward warmer and drier conditions in the Eastern Mediterranean, rather than on natural climate variability.

The researchers said this trend matched computer simulations of how the region responds to increases in greenhouse-gas emissions, and appeared to be due to two factors: a weakening of winds that bring moisture-laden air from the Mediterranean and hotter temperatures that cause more evaporation.

The link between the localised climate change and the disruption that Syria has experienced is described in this way:

Some social scientists, policy makers and others have previously suggested that the drought played a role in the Syrian unrest, and the researchers addressed this as well, saying the drought “had a catalytic effect.” They cited studies that showed that the extreme dryness, combined with other factors, including misguided agricultural and water-use policies of the Syrian government, caused crop failures that led to the migration of as many as 1.5 million people from rural to urban areas. This in turn added to social stresses that eventually resulted in the uprising against President Bashar al-Assad in March 2011.

What began as civil war has since escalated into a multifaceted conflict, with at least 200,000 deaths. The United Nations estimates that half of the country’s 22 million people have been affected, with more than six million having been internally displaced.

The researchers said that there were many factors that contributed to the chaos, including the influx of 1.5 million refugees from Iraq, and that it was impossible to quantify the effect of any one event like a drought.

Essentially Syria suffered a major drought from 2006 to 2009 and this event was consistent with localised climate change predictions.  1.5 million people dependent on farming became displaced and fled to the cities causing extreme pressure and tension which Syria’s fragile autocratic rule could not handle. Then when civil discord broke out the State started to destroy itself.

We may not be seeing a temporary aberration.  As water in local areas becomes more and more scarce it is likely this will become a more common event.  This may be the first mass migration of people from warmer to cooler areas.  But it is likely it will not be the last.

And our Government’s response?  John Key has ruled out increasing the paltry 750 places available for refugees during this time of crisis.  And his Government’s insistence that agricultural trade is more important than protecting our environment means that we will continue to be a major part of the global warming problem.

Syria’s refugees needs other countries to treat them humanely and the world’s environment urgently needs strong decisive action. It is appalling that this Government will do neither.

172 comments on “Is Syria the first failed state because of climate change? ”