Just before the parliamentary recess National released its latest set of Laura Naude targets.  They will join all the others – catching up with Australia, jobs from the cycleway, government surplus by 2014, yadda yadda yadda. I can’t think of a single target National has actually met. These targets aren’t real; they are just there to provide fodder for uncritical media.

Banks engaged in market fixing. What a surprise. No doubt someone will be held to account…

Parata was briefed on teacher cuts

It seems that Parata was fully briefed on teacher cuts after all, but she somehow “did not have enough time to mention it”. The government’s most recent humiliating bungle just got worse.

So here is the story that will probably summarise this government in the history books.  The whole cabinet delegated responsibility to John Key and Bill English to achieve their promised land of surplus in 2014/15.  They defined themselves as the only party that could deliver this goal, they jettisoned all other goals in pursuit of a single number, and they can’t even achieve it… 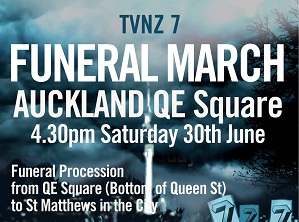 Patsy of the year

Shanghai Pengxin’s bid to buy the Crafar Farms was accepted the 2nd time on promises it would invest in building the farms’ productivity in a way a New Zealand buyer couldn’t. Instead, they immediately turned around and tried to sell 3 of the farms at an outrageous profit. Pengxin has shown it has no intent of being bound to the commitments it has made.

Time for Govt to bring the cops to heel

Looks like the Police have cost us a fortune in an inevitable lawsuit from Kim Dotcom. Not only were the warrants they used to raid his house illegal, they took things they weren’t entitled to even under those illegal warrants. They aggravated this by playing FBI wannabes, causing distress and public humiliation. Then they gave their illegally obtained information to the Yanks.

We’re getting used to the Nats running bash the beneficiary /poor /Maori /unemployed /criminal /etc distractions but it’s getting pretty bad when Bill English gets in on the act. Weirdly his idea of drug-testing beneficiaries seems to have been picked up from a Daily Show piece on how it failed in Florida – costing money, not saving it, and proving beneficiaries use drugs less than the rest of the population.

Tariana Turia’s privatisation by stealth of welfare for Maori, known as Whanau Ora, was an open invitation to fraud. Money was signed over to groups with no track record and no plan. It’s finally caught up with her as New Zealand First, Women’s Refuge, and the Greens team up to reveal Turia’s lies and willful blindness over reported fraud in Palmerston North.

Now the legislation to sell our assets has passed, the question on lefties’ minds is whether it’s more principled to refuse to buy them or to spend the money to ensure they don’t get sold offshore.

Katherine Rich on the Health Promotion Board: The next outrageous piece of Nat cronyism

Putting the CEO of the leading lobbying agency and industry promotional group for companies promoting sales of sugar, fat and alcohol on the Board of the public health agency supposed to prevent harm to young NZers is an outrageous act of cronyism.

The end of Back Benches

Back Benches was a brilliant show. A lovely amateur air that never became awkward thanks to the unflappable humour of Wallace Chapman and Damian Christie. I never got along in person but it was a great watch. And it was clear that it was the audience that made it. They brought a vibrancy and a direct interaction for the politicians that no other show has.

John Key has this weird defence when challenged over the number of Kiwis who will buy and retain shares in his asset sales, given that shareholders in Contact have plummeted from 225,000 at point of listing to 78,000 now. He cites a single article by a single journalist that says Contact is widely-held. Yesterday, Key quoted at length from the year-old article. And walked straight into David Shearer’s trap.

My uncle Jack Fleming joined the RNZAF two weeks after his brother Andy  was killed flying a biplane against Zeros in Malaya. Jack’s first and last operational flight was in a Stirling bomber shot down over Germany; only one of the crew baled out and survived. Jackwas one of the 1861 New Zealanders who did not return home. Today a memorial will be unveiled in London’s Green Park to all those brave men. Competition is the wrong model for education, and National’s nonsense “league tables” are going to make it worse…

There ought to be a question asked of all prospective candidates: ‘when is it OK to compare a political opponent to Hitler’. The only acceptable answers: ‘when they start killing Jews’ or ‘when they invade Poland’. Anything else and they don’t get to be a candidate. Basic litmus test of political nous. All you do is taint your own side.

How do we move forward from here?  How do we get the consensus we need?  How do we get more politicians around the world making not just speeches like David Cunliffe’s, but acting on them?  Setting the targets and the plan behind them to avoid the brutal logic of climate change.

3 years ago, a National minister dancing on a flattened boyracer car would have been a PR coup. And certainly that’s how National’s spin doctors expected it to play out last week. But times have changed. Now, it’s being criticised as an unseemly act and a waste of money through-out the media. These tipping points creep up on governments. Strengths suddenly become weaknesses.

They’re quite literally selling our country down the river.

John Key must think the New Zealand public have the memory of a goldfish. He’s put forward bold plans before, but they usually end in failure. Closing the income gap with Australia, creating more jobs, reducing the number of people fleeing to a better life in Australia. And now the promise to get back into budget surplus, which he’s already backtracking on.

After a large number of meetings around the country in the lead up to the turn off of TVNZ7, we finally get to the rallies:

That’s the Guardian headline. Supposedly designed to give the Tories “political momentum”, it is late and over budget.  The Treasury is resigned to the programme costing money rather than providing savings. The LibDems won’t have a bar of it. Critics describe it as “pitch-rolling”, preparing the ground for further “reforms”.  More like spin-bowling here.

National’s Local Government Act 2002 Amendment Bill will do significant damage to local democracy as they seek to restrict councils to “core” services, put in fiscal constraints, put power into fewer hands and override local concerns with amalgamations. Overall the legislation is shoddy.  The Regulatory Impact Statement on the Government’s proposals from the Department of […]