Now we learn that directors’ fees are set to double after National sells or assets. Who pays for the fat-cats to get twice the cream for the same work? We do. Through higher power prices. It’s just another cost of privatisation that we all pay – despite the fact that Treasury reckons 95% of us won’t buy shares. No wonder 100,000 of us have signed the referendum petition already.

I’m sorry, where was the plan?

“More than 20,000 unemployed people will be moved off the benefit within five years if the Government manages to meet its newly announced targets.”

Yes, but a target isn’t a plan.

National’s latest plan to save the country – make another list of targets! What no-one has pointed out yet is that we won’t know whether these target have been achieved or not until 2018 – National would need to be a 4 term government to ever be held accountable to these targets. The list is a curious mix of the utterly unambitious, the impossible, and the deceptive.

There – “Cameron announces Tory plan to slash benefits.” Here – “The Government wants Work and Income to cut the number of long-term beneficiaries on a working-age benefit, John Key has just announced.” Tories normally do this when they are in trouble.

You’ll really want to know this – the queen has just updated the curtsy order.  “Blood princesses” come first, so if William isn’t there Kate has to curtsy to Anne, Alexandra, and even Beatrice and Eugenie!!! Will be interesting to see how low Bronagh goes when Charles and Camilla come to spend our money later this year.

National are so scared of the “Nanny state” hysteria that they drummed up from opposition that they’re now ignoring official advice and killing off law changes that would save lives.

David Craig on Inequality in NZ – Winner takes all

This free Fabian Society seminar is on tomorrow Tuesday in Wellington at Connolly Hall in Guilford Street, starting at 5:30pm All welcome; you can register here. Will be interesting.

Nats to mine world heritage areas

The Greens have discovered that National is having world heritage areas in Northland and the West Coast aerial surveyed for minerals. They’re exploiting a loophole where some of the heritage areas haven’t been included in Schedule 4 of the Conservation Act. The next stage will be to give away the data to miners and let them rip up our world heritage areas.

The Right would have us believe that the election was a referendum on asset sales and nothing else. Well, let’s take a closer look at the results of that ‘referendum’. Yeah, there’s no mandate there.

There is a sociopathic policy of the leadership at ACC, which sees staff financially incentivised to push long-term claimants off ACC leading to many of them going on the benefit rather than getting rehabilitation. Now, we have proof that this policy came right from the top. National ministers set arbitrary targets for the number of long-term claimants to be booted.

National’s record on local government is horrific: the lack of consultation as they rammed through the Supercity, the canning of ECAN, and continued suspension of democracy in Canterbury, the pushing of asset sales on an unwilling Christchurch.

And their latest attack – the Local Government Act 2002 Amendment Bill – will do significant damage to local democracy.

What’s in the TPPA?

While we the public distract ourselves with trivia like car crushing, and focus on other important matters like asset sales, the TPPA which is quietly unfolding in the background is actually the most important ongoing political issue.  It has potentially disastrous implications for our sovereignty and our future.

It’s sickening to see rich ministers and columnists saying ‘of course we need to green the economy’ and then turnaround and promote fossil fuel extraction and agricultural intensification – things that will ultimately wreck the environment and the economy that is built on it. The truth is, we’re a hugely wealthy country already – it’s just most of the wealth is with the endlessly greedy elite.

I’m going to try and put up a piece each Sunday of interesting, longer, deeper stories I found during the week. It’s also a chance for you to share what you found this week too. Those stimulating links you wanted to share, but just didn’t fit in anywhere (no linkwhoring).  This week: Greece, Watergate and Tax avoidance.

Muddling through with “intelligent austerity”

It’s our official policy according to Treasury’s Chief Economist at a seminar yesterday. A questioner asked “What’s intelligent about it?”, citing anti-tradables bias and income inequality as examples. There is a more intelligent approach says Krugman citing IMF  research. We could use it here.

I am the Markets

“Markets have become increasingly concerned that the austerity programmes in the eurozone are causing a vicious circle of recession”, and “Markets were confused by mixed messages from European capitals”. I have only one word of reply: Bollocks. Did anyone phone me to ask how I, The Markets, was feeling about these subjects? Did they hell!

National pollster and Herald columnist (I know!) David Farrar has revealed what National has up its sleeve for asset sales. No, I’m not talking about how they would put ‘mums and dads’ at the ‘front of the queue’, or any such nonsense. I’m talking about how they will attempt to de-legitimise the referendum or, alternatively, try to slam the sales through before it happens.

Robertson and Cunliffe on the Environment

Grant Robertson and David Cunliffe will be talking environment & economy at Titirangi Saturday at 1pm.

It’ll be interesting to watch how Labour positions itself on this pivotal question vis-a-vis the Greens.

Scott exhorts us all to just get along. If we could just love each other and the Dear Leader, wouldn’t things be better?

Major changes in the media in Oz will have their impact here – some already have. Interesting times ahead for all, including the Standard. 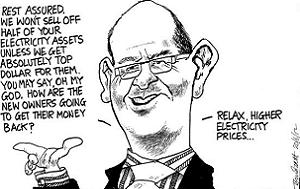 Kevin Hague has discovered ACC managers are getting bonuses for kicking people off the scheme.

That’s not surprising – this government beats up on the weak almost as much as it sucks up to the powerful.

When the government is hooting and hollering over 1.7% annual growth, it’s time to admit we’ve entered a new paradigm. In the past, you would have expected 4-5% growth coming out of a recession. Now, anything above the rate of population growth is treated as a miracle. Growth as we used to know it isn’t coming back. What does that mean for economic policy?

A strong safety warning today about sheeptruck disaster met Ministerial indifference from Associate Transport Minister Simon Bridges. He said Australian legislation to promote safety and fairness in the road transport industry was not needed here because “New Zealand already has a system of work time requirements to help manage the risk of fatigue”. More infamous last words from a National politician – but the police are really worried.

So the first car has been crushed. While ministerial grandstanding abounds, a criminologist describes it as “vindictive, malicious, petty and an undignified way of dealing with the problem”.