One of the oddities of Julian Assange’s long overdue arrest is that extradition is now his best option. 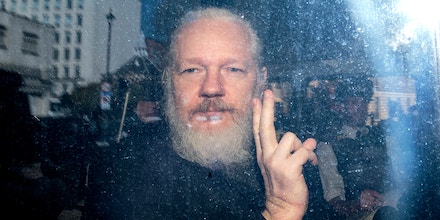 Not to the US, of course, but to Sweden.

He is far less likely to be sent to the States from there than he is from the UK because Sweden has stronger protections around sending prisoners to countries where the death penalty is possible.

Not that the sanction of execution is directly hanging over him, though I do sense that the accusation of conspiring with Chelsea Manning to hack her employer is merely a holding charge.

If he does find himself in the States, more serious trials await.

So Assange’s best bet is do his time in the UK for breaching bail (6-9 months, apparently) and accept a return to Stockholm to defend the rape and sexual assault charges when they are laid.

And laid they probably will be.

One of his accuser’s lawyer has said that her client wants the investigation re-opened.

The woman’s accusation, Swedish prosecutors told England’s High Court in 2011, was that in her home, “Assange deliberately consummated sexual intercourse with her by improperly exploiting that she, due to sleep, was in a helpless state.”

“It is an aggravating circumstance,” the prosecutors added, “that Assange, who was aware that it was the expressed wish of the injured party and a prerequisite of sexual intercourse that a condom be used, still consummated unprotected sexual intercourse with her.”

The second alleged victim is Anna Ardin. She told the Swedish newspaper Aftonbladet in 2010 that the complaints were “not orchestrated by the Pentagon” but the result of actions by “a man who has a twisted attitude toward women and a problem taking no for an answer.”

The Swedish prosecution authority says that the investigation could be reopened as the statute of limitations for the suspected crime of rape is 10 years and the offence was allegedly committed in mid-August 2010.

The Swedish authorities will come under considerable pressure to proceed with the case. This is entirely right and proper.

If the authorities in the UK look to extradite Assange to the US ahead of Sweden, it will send the message, yet again, that rape is a trivial matter.

This point has been made by 70 British Parliamentarians, who have written to Home Secretary Sajid Javid asking for due process to be followed and the accusations of sexual assault not to be minimised.

Sarah Green, co-director of End Violence Against Women, claims Assange’s portrayal by some as a victim was an affront to rape survivors.

“He’s always benefited from his cult hero status, painting himself as a victim and being very righteous. Yet this is about rape, it’s what he is accused of. It’s extremely serious.”

Green adds that the rape allegations were being smothered by the wider debate on Assange.

“The constant downplaying of rape that lies at the centre of this is undignified. This is serious – the harm rape does, even the impact it has when people dangle it around in the news as though it’s a trivial part of the story,”.

The Guardian’s Owen Jones also makes this point in an excellent opinion piece:

“You cannot be a progressive if your response to someone making an accusation of rape is to dismiss her simply because you admire the man who is accused – worse, to portray a woman as a lying, Machiavellian schemer trying to bring down a great man is misogyny.”

As usual, Jeremy Corbyn fluffed his lines, failing to mention the possible Swedish case, while calling for Assange to be protected from extradition to the US. The Labour leader quickly realised his mistake and offered a ‘clarification’, saying “Sweden must come up with proposals on this, and I do think he should answer those questions,” .

Corbyn might be slow off the mark, but he got there eventually.

However, the question remains for other Assange supporters whose uncritical hero worship is blinding themselves to their unwitting support of rape culture.

It’s going to be embarrassing for many when Assange’s defence team decides to swallow a dead rat and accept that his best option to avoid life in an American prison is to finally accept he has a case to answer in Sweden.

252 comments on “Assange Must Be Extradited ”