Duncan Garner does good work sometimes, but he is also capable of pure bollocks. Yesterday’s ill informed rant pushing the TPP was a shocker. (Garner spent the rest of the day re-tweeting anyone who said something nice about it – ouch.)

TPP or die – why we need it

The political consensus on free trade is over.

No it isn’t. Labour has consistently said that they support free trade. In the case of the TPP they reject all the fishooks that come with it. It’s like claiming that someone rejects food because they refuse to eat a poisoned apple.

After decades of supporting free-trade Labour has chosen to veer left into the bosom of NZ First and the Greens and oppose the TPP. It’s short-sighted and totally hypocritical in my view. It looks like the party has had its strings pulled by anti-TPP academic Jane Kelsey.

And we’re in to the kind of scaremongering that tells you much more about the attacker than the attacked. And so on and so on I’ll spare you the rest.

Garner owes it to his readers (and his country) to be informed about both sides of the TPP debate before running off at the keyboard like this. Please Mr Garner, go read these resources at TPP Legal:

Or if that seems like too much hard work, why not listen to your readers? (Poll below.)

The truth is Labour has taken a massive risk opposing the TPP. I sense the silent majority understands we have to be part of it, despite the noise from the usual suspects.

Maybe you don’t understand the silent majority as well as you think you do. 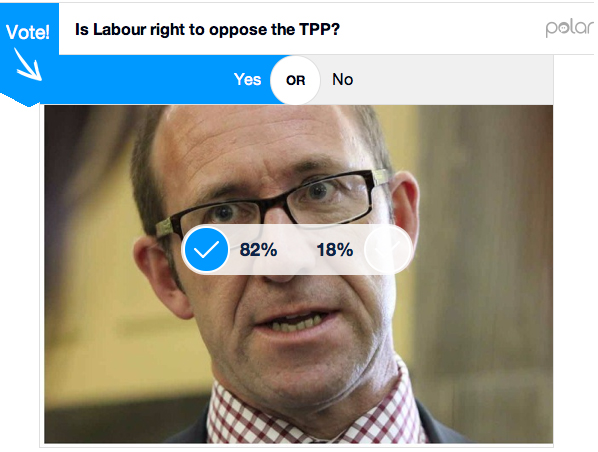