Written By: mickysavage - Date published: 10:42 am, October 3rd, 2017 - 155 comments
Categories: International, law, spin, the praiseworthy and the pitiful, us politics, you couldn't make this shit up - Tags: 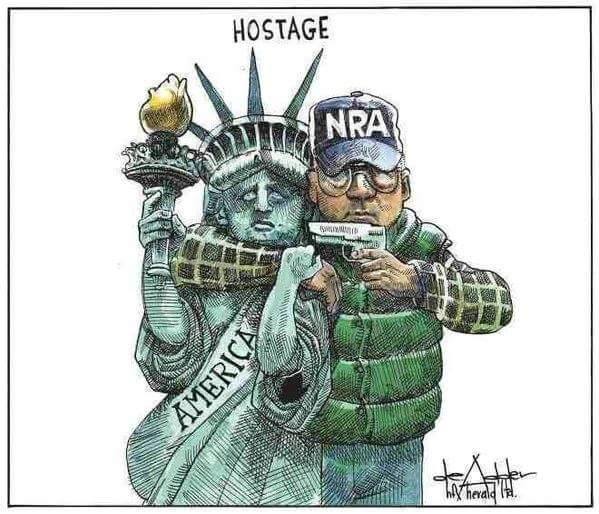 Another day another mass shooting in the United States of America.  At least 58 people have been killed and hundreds of others injured by a 64 year old armed with an arsenal of weapons.

With utter predictability the right is trotting out well rehearsed lines.  With a sense of ad nauseam the US right’s talking heads are claiming that this is the price of living in a free society, even though no other free society has this rate of gun inflicted deaths on innocent men and women.

Some are sticking by the insane proposition that the solution is more guns.  But you just have to think about 20,000 country and western festival goers shooting up the Mandalay Hotel in self defence to realise that this is not a solution.

The disparity in treatment of the killer is again evident for all to see.  From early reports the current killer is a lone white male and questions are being asked about his mental health.  If he was black or had any sort of link to Islam the word “terrorist” would have a place in every headline.

And the leader of the free world expresses “warmest condolences and sympathies” to the victims.  Meanwhile the Republican Party will bunker down and refuse to do anything about gun control.

Twitter had some of the best and most unusual responses:

both my father and my sister are dead because of guns and I would like to plunge in now https://t.co/BmXyEX4U7w

Your campaign took $30 million from the NRA last year. Save your prayers for something else. https://t.co/ZsYzD93Nqm

Don't talk about guns after a massacre. Or climate change after storms. Or austerity after firetrap buildings burn. Talk when no one listens