John Key has given a powerful speech on NZ’s housing crisis:

Today, I want to talk in some depth about the declining rates of home ownership in New Zealand.
…
It wasn’t so long ago, in the 1990s, in fact, that New Zealand had a high level of home ownership compared to other countries. Not so anymore. We now have what has been described as the second worst housing affordability problem in the world.

Make no mistake; this problem has got worse in recent years. Home ownership declined by 5% between the 2001 and 2006 census to just 62.7%. To put that into context, home ownership for the preceding five years had been stable at 67.4%.

If you dig down into those numbers a little deeper, some worrying facts emerge. The share of homes owned by people aged 20 to 40 dropped significantly between 2001 and 2006. Young people – the people we most want to prevent joining the great Kiwi brain-drain – are really struggling to get onto the property ladder.

This decline shows no signs of slowing. In fact, on current trends, the crisis will only deepen. Home ownership rates are predicted to plummet to 60% within the next decade. And one of the biggest factors influencing home-ownership rates over the next 10 years will be the difficulty young buyers will have getting into their first home.

This problem won’t be solved by knee-jerk, quick-fix plans. And it won’t be curbed with one or two government-sponsored building developments.

Instead, we need government leadership that is prepared to focus on the fundamental issues driving the crisis.
…
The … most important reason for the home affordability crisis is one of supply. It explains why houses have become so unaffordable for so many people. Quite simply, not enough new houses are being built in New Zealand. This is a recent phenomenon. In many parts of the country, increases in demand for housing are now outstripping supply.

That imbalance is vividly illustrated in Auckland. In the five years to 2006, the supply of housing stock has failed to keep up with population growth. Again to put that into context, over the 15 years to 2006 the housing stock grew at a faster rate than population. So the supply problem is a recent one. Economics 101 would tell you that if the demand for housing outstrips supply, then the only way for house prices to go is up, up, up.
…
National’s goal is to turbo-charge the supply of housing in New Zealand by confronting the fundamental constraints that have kept a lid on it. By contrast, Labour’s instinctive reaction to the housing supply problem is to say the government must get in and build some houses. … I think it’s dangerous for the Government to pretend that developments such as that at Hobsonville are some sort of panacea to the housing affordability crisis.
…
Central and local government should always be aware of environmental and community concerns regarding new housing developments. But if we are serious about dealing with the housing affordability crisis, if we are serious about protecting the Kiwi Dream of home ownership, then we need to get a better balance between those concerns and their eventual impact on home affordability. To not do so is to ignore a fundamental long-term driver of the housing affordability crisis.
…
National’s infrastructure plan will go hand in hand with our efforts to confront the housing affordability crisis. We will free up more land to build on while ensuring new developments are served by the infrastructure they need.

Over the past few years a consensus has developed in New Zealand. We are facing a severe home affordability and ownership crisis. The crisis has reached dangerous levels in recent years and looks set to get worse.

The good news is that we can turn the situation around. We can deal with the fundamental issues driving the home affordability crisis. Not just with rinky-dink schemes, but with sound long-term solutions to an issue that has long-term implications for New Zealand’s economy and society.

National has a plan for doing this and we will be resolute in our commitment to the goal of ensuring more young Kiwis can aspire to buy their own home.

It’s a worthy goal and one I hope you will support us in achieving. Thank-you.

How about that crisis eh? (There were several more instances of crisis deleted.) As I’m sure you have all guessed, that Key speech was from 2007. Since then all the housing crisis indicators (except interest rates) have got worse.

Why does Key (and Bennett) now say there is no housing crisis? Was Key lying then, or is he lying now? Does he care? Does it matter? 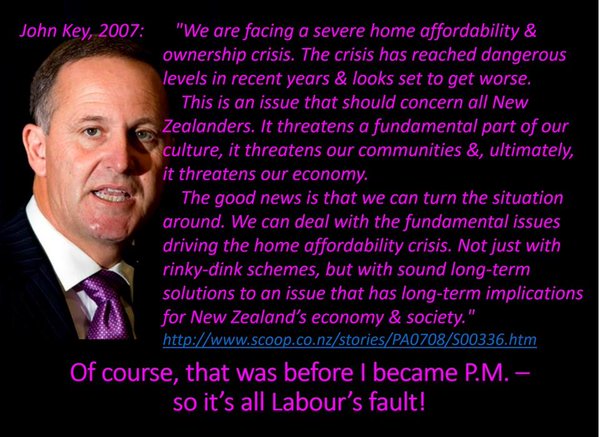