In a week where angry old white men have dominated the news, it’s refreshing to find a rejected right wing MP talking some sense. Peter Dunne, for it is he, has written a short, informative and quietly damning piece on National’s biggest problem. And no, it’s not Simon Bridges. It’s their lack of potential partners.

Writing about the demise of TOP, Dunne makes the point that many parties have been formed in NZ by wealthy individuals keen to show voters the One True Path. However, as Dunne notes:

The common threads of all these moves are that political parties formed and funded by wealthy business leaders do not last, because those who form them quickly lose enthusiasm for the vehicle they have established …

In short, if the instant parties don’t deliver instant results, their owners move on to other projects. Bob Jones’ The NZ Party, the Colin Craig led Conservatives and Kim Dotcom’s Internet Mana mashup have all not only failed to make it to Parliament, they have significantly harmed the chances of their preferred coalition partners.

So you’d have to wonder why Simon Bridges is so confident that he’ll have other options at the next election:

“We will need to have friends, whether it’s NZ First imploding and half of them coming over to us, whether it’s a country party… or a real Green Party – not a watermelon party that’s green on the outside and red on the inside – there will be options.”

If Simon thinks he’s got friends, facebook says otherwise. Plenty of room in the Te Atatu roadshow meeting if you want to hear what Simon says! 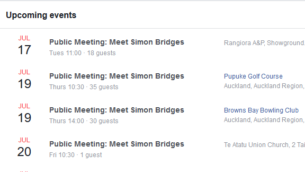 The simple fact is that the there are only two ways National can lead the next Government; win outright or hope Winston Peters retires and Shane Jones takes NZ First to the right. Neither option seems likely; Winston is fit as a fiddle and loving life and for the Tories to get the 48 or 49% needed to gain 61 0r more seats NZ voters are going to have to go off Jacinda Ardern in a big way. And that ain’t going to happen.

So what can National do?

I suspect that they will try to white ant the Greens and NZ First, infiltrating and influencing those parties in a bid to make the idea of joining a National led Government more palatable. However the Greens are probably wise to the possibility of a rash of disguised ‘blue/greens’ joining up before the next election.

In NZ First, the Tories have already got their man at Winston’s right hand, however I reckon Shane Jones will not be taking over until 2021 at the earliest. And he’ll then bore NZ First out of existence at the following election.

So what does the left have to do to keep Simon in opposition?

Be vigilant, be active, be prepared for the fight. This Government is almost certainly going to be re-elected exactly as it’s constituted now. However that still needs eyes on the ball, feet on the street, and a determination to keep the change agenda in charge.

The current unbottled flood of industrial discontent isn’t really an issue for the Labour led Government. After 9 years of enforced neglect by the Key/English government, there was bound to be a sense of liberation in the public service. Give ’em what they want now, so it won’t be an election issue in two years.

Labour and the good folk in the Greens and NZ First need to keep focussed and keep an eye out for offers that are too good to be true from the right. We need an election 2020 vision that continues to deliver for the majority.

Simon Bridges and No Mates National aren’t the problem; only our own complacency can cost us the next election.

68 comments on “No Mates National ”