Way I see it, nursing is one of those occupations where, if nurses pay was doubled, it wouldn’t be too much to be giving them. There are a few other occupations like that.

But it seems from feedback and posts across facebook pages, that nurses are up against two fronts in their bid for better wages and conditions. Sadly, but not unusually, one of those fronts is their very own union whose officials are urging they accept the latest “revised” offer that’s on the table.

Why, when they already struck on the 12th of July, do the “powers that be” (union officials included) think some revision of an offer will cut the mustard? And while we’re at it, why do all the pom pom wavers for industry wide awards, that come with a ban on strike action, think that’s a way to go? Maybe the current nursing situation will elicit some pause for thought on that front and the laying aside of some pom poms. 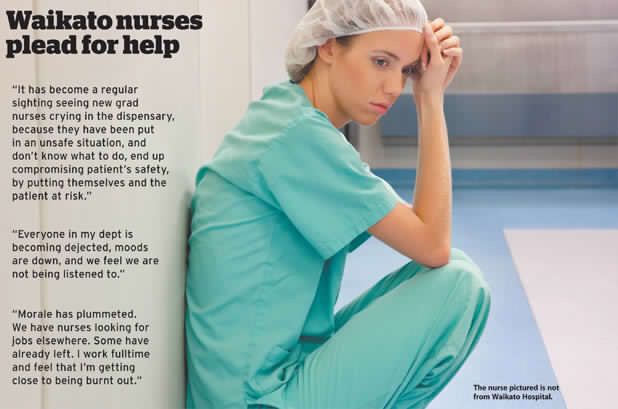 But eventually the nurse will snap. Eventually, dedicating ones working life to nursing will become problematic or untenable. That (I’d argue) would most obviously express itself by way of staffing level shortages.

And we have them.

Where are we at as a society when a profession that attracts those exhibiting some of the better facets of human nature, offers wages and conditions so lousy that even the better among us row back from choosing it as a career path or quit?

Nurses, like caregivers, and others in the business of ensuring our wellbeing should be looked up to and rewarded well for their work – not subjected to business and government taking advantage of their better nature to diminish their work conditions. And no nurse should ever have to stand outside two doors, one marked “union” and the other marked “boss” and ask themselves which one they should negotiate with first.