Should We Fear Judith Collins? 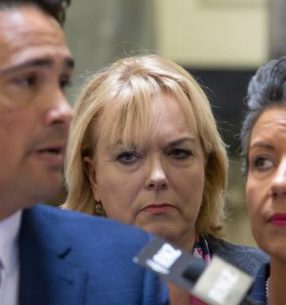 The Newshub/Reid Research poll is clearly devastating for National and its current leader, Simon Bridges. It’s even worse than the last Colmar Brunton poll, which also had Labour leading the Tories.*

The trend is clear; National under Bridges are stuffed.

The question facing the Tory caucus when they meet this morning is exactly what to do about it.

Logic would say Simon’s had his run. He went on a limo tour of NZ last year to introduce himself to ‘ordinary New Zealanders’. Turns out New Zealanders think Bridges is very, very ordinary indeed.

However, the difficulty is two fold. First, they have to work out the timing of his dumping. Too early and the Nats risk the new leader having their honeymoon period when nothing much is going on. Too late and Bridges will have dragged them even further down in the mire.

Remember, this is a man whose electoral strategy is entirely based around popularity. Bridges is relying on no mates National achieving a 47% vote, something unheard of under MMP.

But its the other part of the equation that is most vexing for National.

Who is going to lead them to inevitable defeat in the next election?

Frankly, it has to be Judith Collins. There’s no one else with even a skerrick of positive name recognition out in voterland.

And that change should worry the left not a jot.

Collins is past her sell by date. Any chance of her really achieving anything politically was under the last Tory Government.

She’s had a past, but at present, she has no future.

But, she’s still National’s best bet. Like Mike Moore for Labour in 1990, she can save the furniture. But that’s as good as it gets.

I’ve said it before and I’ll repeat it here. The next National Prime Minister has not yet entered Parliament.

That’s the real task for the Tories.

Start scouting now, National, and you might have a shot in 2023.

Or, just hang on to Simon and see how bad things really get.

*Correction: The October CM poll had Labour on 45, Nats 43. The December CM had National on 46, Labour 43. In both polls, National fell well short of being able to form a Government without NZ First support.

Thanks to Alwyn for spotting the error.

130 comments on “Should We Fear Judith Collins? ”