Time for Auckland to go back to level four? 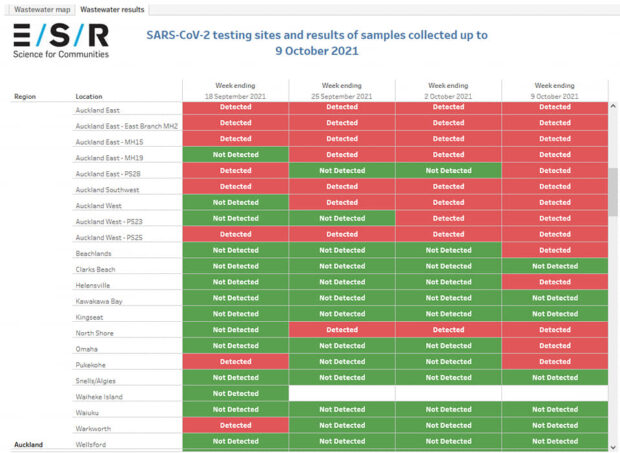 There was sobering news yesterday with 71 new cases of Covid being reported in Tamaki Makaurau.

Authorities have confirmed that the R value of the virus could be 1.2 to 1.3 and the gradual increase in numbers bears this out.  And ESR testing (pictured above) suggests a slow spread of the virus throughout Tamaki Makaurau.

I understand the rationale for the Government to go to level three and to then relax the restrictions even further.

Level four had reduced numbers but not to zero and the incidence of infections among sex workers, those struggling with housing issues and gang members meant that the part of the population most in need of protection and isolation were not going to get it.  And that the chances of the rules being adhered to were not good.

Chris Hipkins has described what happened.  From Derek Chen in the Herald:

Public health experts said last week there was still a diminishing chance of returning to zero cases in Auckland, but Hipkins said that hope slipped away about three weeks ago.

“When we got into those single figures [in daily case numbers], I thought, ‘Yes, we might just do this’.

“That was the tipping point. When we started to climb back out of those single figure cases, which we only sustained for one or two days, it started to become clear. That was also the point at which it got into those very hard-to-reach parts of the community.”

That was also just after the move from level 4 to level 3 in Auckland, but Hipkins insists that staying in level 4 would not have seen a return to zero cases.

“The biggest increase in cases has been from indoor social gatherings [including at level 4]. Level 4 and level 3 only work if people voluntarily comply.”

I get that.  But we are in a race against time.

What has caused the diminishing of the public response to the lockdown?  Fatigue and tiredness have played their part.  And the unrelenting negativity of National and its social media branch Newstalk ZB have had their effect.  If ever there was a time for a single message from the parties in Government this was it.  What we have had instead is relentless attacks and negativity and repeated claims of failure when even now our performance is still world beating.

There will also be questions about the recent injection of John Key into the debate.  Clearly the right in our community had decided that enough was enough and that garage wine sessions and overseas travel were more important than containing a pandemic.  But he needed to be stared down.  His concerns, in the midst of a pandemic that could result in thousands of kiwis losing their lives were trivial.

There have been many criticisms of the speed of the vaccination program.  But Aotearoa is now in the top half of OECD nations for having received at least one jab.  And second jabs tend to follow pretty quickly. 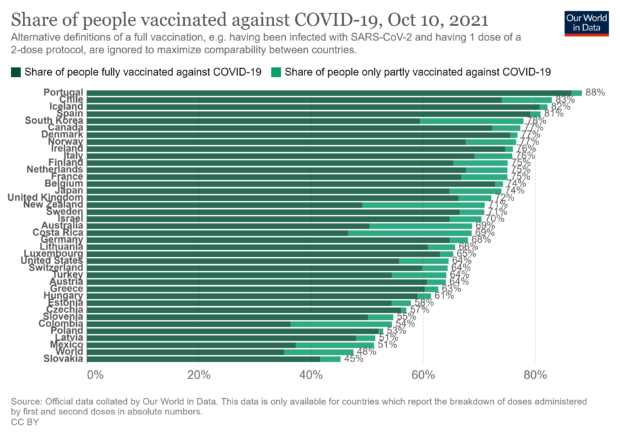 As well as this our vaccinations per head of population continue to top the OECD. And just a reminder, it is not the early stages of a race you have to win, it is the last stages.

Clearly we need to get the vaccination rates up to 90% at least before we can breathe easy or at least easier.

Japan may offer an answer to how to handle Covid delta.  During the Olympics it had a significant tick up in Covid cases but this has now been turned around.  The Guardian has this commentary:

Just days after the Tokyo Olympics drew to a close, Japan appeared to be hurtling towards a coronavirus disaster. On 13 August, the host city reported a record 5,773 new Covid-19 cases, driven by the Delta variant. Nationwide the total exceeded 25,000.

Soaring infections added to resentment felt by a public that had opposed the Olympics, only to be told they could not watch events in person due to the pandemic. Hospitals were under unprecedented strain, the shortage of beds forcing thousands who had tested positive to recuperate – and in some cases die – at home.

The then prime minister, Yoshihide Suga, who had ignored his own chief health adviser in pushing ahead with the Games, was forced to step down amid stubbornly low approval ratings. A state of emergency in the capital and other regions that had been in place for almost six months looked likely to be extended yet again.

Yet something remarkable has happened in Japan in the two months since Emperor Naruhito declared the Games closed.

This week, almost a fortnight since emergency measures were finally lifted, new infections continue to plummet in Tokyo and across the country. While parts of Europe, including Britain, struggle to contain cases – despite a modest decline globally since August – infections in Japan have fallen to their lowest levels in more than a year, triggering optimism that the worst may be over for the world’s third-biggest economy.

On Monday, Tokyo reported 49 cases, the lowest daily figure since late June last year, while the nationwide count was 369.

Experts say no single factor can explain the extraordinary turnaround in Japan’ fortunes.

But there is broad consensus that after a frustratingly slow start, its vaccination rollout has transformed into an impressive public health campaign that has met with little of the resistance that has slowed the rollout in the US, despite Japan’s complicated historical relationship with inoculations.

Another factor cited by experts is the widespread wearing of masks – a habit ingrained during pre-pandemic flu seasons. As other countries drop requirements for face coverings in indoor and other settings, most Japanese still shudder at the thought of venturing out maskless.

Japan’s success suggests that the other stuff, mask wearing, social distancing and washing your damned hands, can all make a difference.  And I do not think it coincidental that the three best performing nations, Taiwan, China and Japan are Asian, with good community commitment to public health messages and to following the rules.

Aotearoa New Zealand is close.  A couple of more weeks of vaccinations could get us tantalising close to herd immunity or at least to a level of population indifference to the virus that will arrest its damage.

The chilling statistic yesterday was that half of the daily infection cases were Maori.  The Crown, our state promised 181 years ago to protect that which was most important to Maori.  Life and good health must be part of this.  The handling of the pandemic is a Treaty of Waitangi claim waiting to be filed.

My preference at the time that we moved to level 3 was for us to stay at level 4.  My current preference is that they reimpose level four for Tamaki Makaurau for a couple of weeks.  Vaccination rates are really good, but we need to get the vaccination rate higher.  Maybe level four will not get us back to elimination.  But it will buy us some more time.

We are close but not there yet.  We need to get the damned daily infection rate in Tamaki Makaurau down and we need to make sure the rest of the country either gets back to zero infections or retains their covid free status.  Maybe it is time for a two week return to a level four lockdown.

114 comments on “Time for Auckland to go back to level four? ”