David Shearer was on TV 3 this morning, reflecting on his last year.  He looked calm and quite assured, presenting a friendly and reasonable persona.  He claimed the following: that the Labour leadership contest is settled; that Labour has a new and different direction; that the polls are moving in the right direction for Labour; that Labour has provided a strong opposition to Key’s government; and that Labour has a new leadership and new front bench line up.  However he doesn’t give evidence of any of this.  How accurate are his claims? 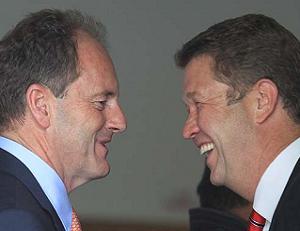 The main area where Labour are claiming a new direction is towards being more interventionist than Key’s government. The affordable housing policy has been the main plank of this alleged new direction.  But one policy does not a direction make.  It is good that they’ve focused on this very crucial issue.  Affordable housing is at crisis level in places like Auckland and Christchurch.  However I agree with Mana that it doesn’t go far enough.  It doesn’t target the immediate crisis for low income people, who are largely renters. And it doesn’t address the issue of the urgent need for more state housing.

Jacinda Ardern has shown more dedication to publicly fronting on issues to do with beneficiaries, such as speaking at the Onehunga Recession Busting Impact rally last week, and foregrounding issues of poverty in her adjournment speech.  However, I haven’t yet seen the focus on poverty in terms of statements from Shearer and proposed policy direction.  I don’t see any new policy direction here.

However, I still don’t see as bolder claim for breaking with the “neoliberal” consensus as we saw druing the last couple of years from David Cunliffe.

The movement is glacial, and hardly a ringing endorsement in the face of a teetering Key government.

The stand out opponents have been Winston Peters and some Green MPs, such us Russel Norman and Julie Anne Genter.  Grant Robertson is a strong performer for Labour in the House, but Shearer has really yet to make his mark.  Others in Labour have done some solid work, such as Phil Goff, Chris Hipkins, Sue Moroney, and Annette King.

It doesn’t seem that new to me. However, newness of faces isn’t as important as the strength of the front bench, and direction it’s taking.

Shearer has improved in his  media and parliamentary performances. I’m still not convinced that Shearer is leading Labour in a new and desirable direction.  I am concerned that they aren’t yet really breaking with the “neoliberal” consensus” and that they are not presenting, as yet, a strong enough opposition to the government. They really do need Cunliffe’s expertise, speaking skills and rough edges on their front bench.

My party vote still leans towards the Greens, and Mana is an important developing force and voice for the left, Maori, Pasifika and all those on low incomes.