With all the charm of Slough 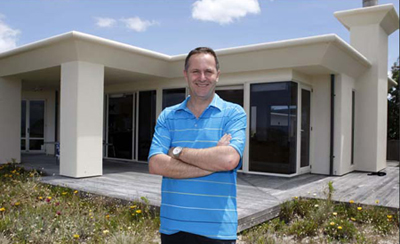 Paul from The Fundy Post has done a rather humorous review of John Key’s holiday home in Success Court, Omaha Beach, as featured in the Herald on Sunday. Suffice to say he’s not impressed:

It is difficult to know where to begin. Here is a house (described somewhat disingenuously by the Herald as a “bach”) which has the appearance of a miniature office building. Rather than its present location at Omaha Beach, its design suits it to a business park on the outskirts of the city, conveniently near major transport hubs. The reader should note the extravagant and charmless cornice, apparently supported by massive piers, as well as the floor-to-ceiling windows in tinted glass. The reader should note these and resolve never to have a home with these features; unless, that is, he should wish to have regular visits from photocopier salesmen, for surely they will flock to his door.

Should one be visiting Mr Key in his holiday home, whether to attempt to sell office products or for social reasons, it would be very bad form to tap one of those seemingly weighty piers. It would chime like a bell. The piers must be hollow, since the wooden deck which apparently supports and surrounds them could not bear the weight of so much masonry. Wits might observe that this is a hollow house for a hollow man.

Sound convincing? That’s probably because Paul’s just been accepted as a PhD candidate at the University of Auckland on the subject of ‘the influence of architectural historians on architectural culture in New Zealand’. Well done old chap.

You can read the whole review here.

62 comments on “With all the charm of Slough ”