Project complete (at least for the moment)

Project code is complete and getting stamped on the hardware.

I have some time for maintenance and writing at last…. So put in your wish lists.

Oh and this is a warning to trolls. I have time to measure you and comment on your obvious lacks and deficiencies again 😈 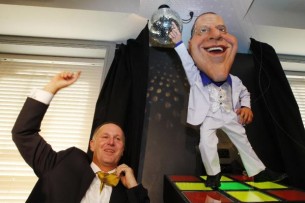 If we can’t afford to buy the assets back, we should at least make clear we will regulate them severely and take the profit out of electricity companies…

Unanimous decision by the 5 judges to dismiss the Maori Council’s appeal.

The minimum wage should be at least $15 per hour. A living wage is estimated at $18.40 per hour. So what have the Nats done? Raised the minimum wage by $0.25 per hour to $13.75. It’s a derisory increase. Even their own supporters think so.

The Nats lied over the hobbit movie. What are we as citizens to do when a government deliberately and shamelessly lies to us? How can we stop this kind of barefaced lying from happening again?

Towards a more inequal New Zealand

The average CEO got a 10% pay rise last year. The average worker got 2.6%. Minimum wage workers will get 1.9% – a 25 cent an hour token gesture. And 30,000 fewer of us have jobs than a year ago and are not earning at all any more. And now we learn the finance sector sucked $440m more out of us last year – a total of $4 billion. No wonder the planes to Aussie are full.

John Key is keen that the ACT party is “regenerating” and National will be there for them. That’s if a party that registered 0%, 0.2%, 0.4% and 0.5% in the latest round of polls can be called “regenerating”: I’ve seen (other) zombies more full of life…

The government has released the Hobbit documents. The Ombudsman ordered them to. The full release is available at stuff and what stands out (apart from the insistent and narcissistic tone of every film industry correspondent) is the fact that Peter Jackson himself noted the “do not sign” advice from the union was being called off. TWO DAYS before he went public with his “evil union” story.

A wheelchair got caught in the rail tracks, resulting in critical injuries.  Pedestrians are low priority, and people with disabilities even lower, making them/us vulnerable: poor pavements, hazardous road crossings, some inaccessible public transport… and more.

I’m starting to feel sorry for Hekia Parata. In his column yesterday Armstrong referred to her as “something of a pariah figure” in the education portfolio.

The reaction to the Auditor General’s report on Key’s Sky City deal is lingering in the headlines much longer than Key would like. “Corrupted process”. “Stench”. “No way to run a country”. Key badly misjudged this one.

John Key is under real pressure over the Solid Energy debacle. He got out the six-shooter – aiming at a 2007 speech by Trevor Mallard to try to blame Labour. Trouble is he’s shot himself. In 2011 he said  he “supported Solid Energy’s plan to dig up lignite and turn it into briquettes, saying the Government wanted companies such as Solid Energy, which is Government-owned, to expand.” Expect more shots from the lip.

I think the Labour reshuffle is quite clever in how it signals the portfolios that its willing to give to the Greens and encourages them to set about being lead opposition spokespeople on those topics. Sure, the reshuffle has some weird stuff in it – ChCh Earthquake spokesperson a backbencher!, 6 ex-staffers in the top 10, Mallard’s ‘demotion’ that isn’t. But there’s some smarts there too.

Random notes on the reshuffle

A few quick thoughts on the Labour reshuffle.

Workers’ rights: too many steps behind

The poll gods must be crazy

Ralph Hotere, one of New Zealand’s greatest artists, has died.

Return of the King?

Word is Labour’s reshuffle will be announced tomorrow.