I have this weird vacillation with climate change at the moment. Despite having written a fair bit about the need for human civilisations to power down, and that green BAU will not save us from runaway climate catastrophe, I find myself often looking at the fast tech change happening and wondering if I am wrong, that we will build electric planes in time, and find a way to transition the industry that underpins our lives to post-carbon.

Then I get brought back to the sharp but still hard to believe reality. Our hope is in a fast transition off fossil fuels, and we cannot do that and retain a growth economy with all the mod cons.

The United In Science report was released yesterday,

The world’s leading climate science organizations have joined forces to produce a landmark new report for the United Nations Climate Action Summit, underlining the glaring – and growing – gap between agreed targets to tackle global warming and the actual reality.

If you’re interested in the science and the maths of how bad things are, there’s plenty of reading there in the tweet thread and in the report itself.  I don’t have the headspace to delve into the detail so I’m going to raise some questions instead. We need good science to base actions upon, but our problem here isn’t that we don’t know what is needed, or what to do, it’s that we’re not yet taking that seriously.

Carbon dioxide emissions grew 2% and reached a record high of 37 billion tonnes of CO2 in 2018. There is still no sign of a peak in global emissions, even though they are growing slower than the global economy.

Current economic and energy trends suggest that emissions will be at least as high in 2019 as in 2018. Global GDP is expected to grow at 3.2% in 2019, and if the global economy decarbonized at the same rate as in the last 10 years, that would still lead to an increase in global emissions.

The net-zero emissions needed to stabilize the climate requires both an acceleration in use of non-carbon energy sources and a rapid decline in the global share of fossil fuels in the energy mix. This dual requirement illustrates the scale of the challenge.

Natural CO2 sinks, such as vegetation and oceans, which remove about half of all emissions from human activities, will become less efficient at doing so. This underscores the need to reduce deforestation and expand natural CO2 sinks, particularly those in forests and soils that can be improved by better management and habitat restoration.

Here’s how I understand that,

The first needs no discussion. Unless one is still a climate denier, it’s a given that we need to reduce GHGs and we’re not. That global energy use is increasing tells us a lot about the problem here: perpetual growth.

I want to know how much of that increased use is because of transitioning to renewables, and whether what we need to do (reduce fossil fuel use) is incompatible with that transition.

I also want to know how much of the increased energy us is due to increasing population, and subsequent increasing lifestyles of the global population. Before any lefties jump up and say we can’t talk about population because it’s unjust, let me be clear: the solution here is for industrialised nations to take a drop in their standard of living.

The third point is crucial. Whatever natural carbon sinks are capable of doing, and how much we can work with that by changing land use (regenerative agriculture and recreating/protecting natural forest systems), we cannot afford to squander that advantage by treating it as carbon offsets to keep burning fossil fuels. This sequestration advantage may be the difference between climate crisis (a drop in standard of living) and climate catastrophe (collapse of human societies and mass death).

In case it’s not obvious, I believe it is still possible for us to prevent the worst of the catastrophe. The good news is that the science supports this,

Technically, it is still possible to bridge the gap in 2030 to ensure global warming stays below 2 °C and 1.5 °C.

A substantial part of the technical potential can be realized through scaling up and replicating existing, well-proven policies that simultaneously contribute to key sustainable development goals. Remarkably, the potential available in just six relatively well-developed areas as shown (below left) present a combined potential of up to 21 GtCO2e per year by 2030. 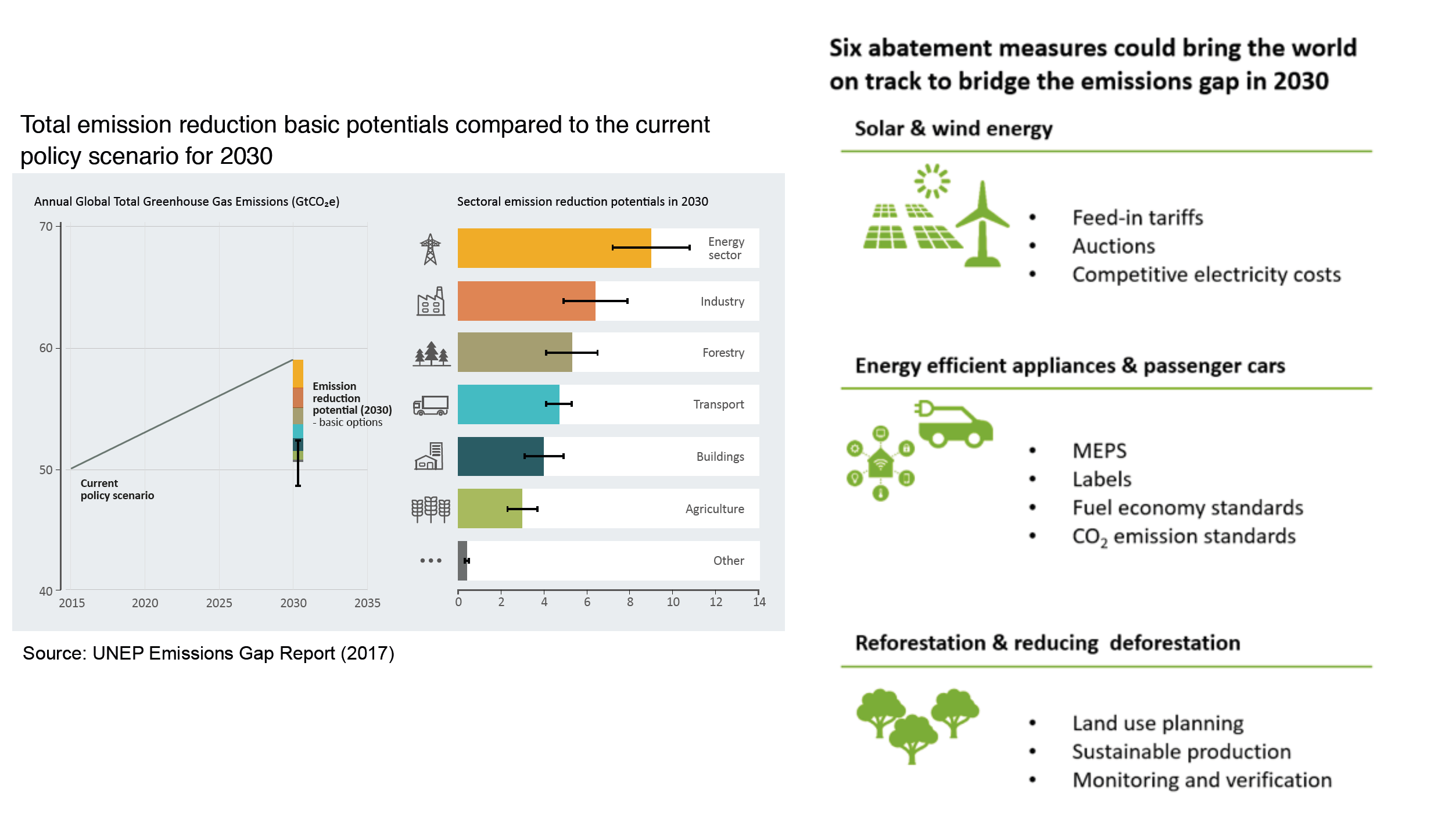 This is Climate Strike week, coinciding with the UN Climate Action Summit. I’m more interested in the potential of social tipping points than I am in relying on what the politicians and bods are doing. What we need is a willingness from many ordinary people to change, then the politicians will follow. If we’re feeling overwhelmed or powerless in the face of the need for that change, then one thing we can do this week is take part in the New Zealand marches that are closing the end of Strike week this Friday.