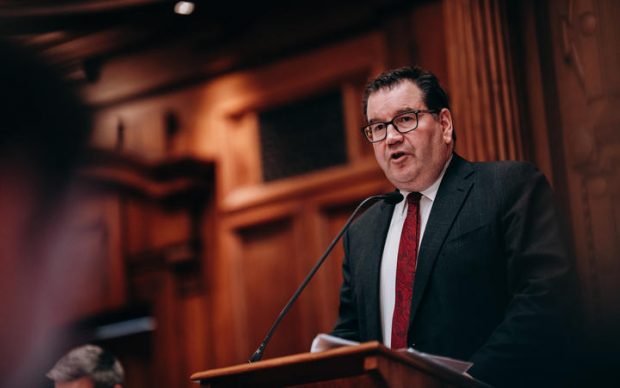 Media has been abuzz with comment about how last election Grant Robertson has backtracked on a promise on not extending the bright line test.

The bright line Finance Minister Grant Robertson painted about the bright-line test before the election has become extremely blurry under questioning at the first question time of the new parliamentary term.

The first session back also gave ACT leader David Seymour a chance to flex his new parliamentary muscle, cutting in across National Party leader Judith Collins thanks to his party’s larger presence in the House.

But it was housing that took centre stage throughout the showdown, as National and ACT grilled the Government on whether it would backtrack on a firm promise to not extend the bright-line test on taxing residential property sales.

Robertson had told media very clearly before the election that his changes to income tax thresholds would be the full extent of Labour’s tax changes this term. He even specifically ruled out extending the bright-line test on Newstalk ZB.

And recent decision to extend the bright line test has led to a number of comments suggesting that Robertson has misled the country.

While reporting of his earlier comment is correct context is important.  The dominant thinking at the time was that Covid would cause house prices to ease.  For instance Treasury’s PREFU released shortly after Robertson’s statement said this:

Housing market activity has been more resilient than expected in the Budget Update, supported by pent-up demand, involuntary savings during Alert Levels 4 and 3 and looser monetary conditions. However, various competing forces make the outlook for house prices particularly uncertain.

Border restrictions are likely to constrain net migration in the short term and heightened uncertainty around the economic outlook constrain demand for housing. Low interest rates and the temporary removal of the Reserve Bank’s loan to value ratio restrictions are expected to provide some offset. On balance, we forecast a period of weaker house prices over the year to June 2021, with prices falling 5.1% from their March 2020 levels, dampening consumption growth (Figure 1.7). House prices then recover as net-migration rises, economic confidence recovers and monetary policy remains accommodative throughout the forecast period. Rising housing wealth is then expected to support the recovery in consumption growth over the final three years of the forecast period. However, given the recent resilience in the housing market, there are upside risks to our forecasts if current sentiment is maintained.

And boy were they wrong.  Instead of market conditions easing they intensified as cheap interest rates and confidence at how well the country was handling the crisis combined.

Faced with a crisis, and it is a crisis, Robertson chose to change his mind.  In fact it appears that he may have ameliorated Treasury’s view which was that an extension to 20 years for the bright line test was appropriate.

Was Robertson wrong to change his mind?  No, we have a crisis.  Politicians should be allowed to change their mind if circumstances change.  To insist that they stick to historical views views and not change their minds when faced with A crisis is crazy.

No doubt the beltway will continue to be fixated about this and National and Act will continue to suggest that Robertson deceived the public, even though it is clear that all he did was change his mind in the light of changed circumstances.