As peak oil slowly grinds down our economy – meeting any hint of growth with sky-high petrol prices and making $2 a litre the ‘new normal’, we are actually, gradually,starting to react. Not at a governmental level, where action is most urgently needed, but in the decisions made by ordinary Kiwis every day.

Just about the fastest way for an ordinary person to consume a lot of oil is by taking an international flight. Since oil prices started rising to high levels and staying there, international travel has largely stopped growing. With the short-term exception of the Rugby World Cup, passenger movements have been stable since 2004. 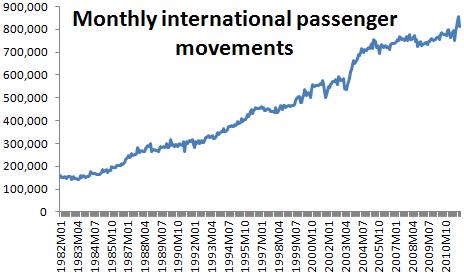 Tourists are also spending less once they get here. The evidence is that people are taking shorter, less costly in fuel, international trips as well, with passenger movements to and from Australia rising while movements between here and Europe are falling.

The vehicle fleet is, gradually, changing in response to oil price pressures. The total number of registered road vehicles has stablised. The number of cars and commercial vehicles on the road has fallen while motorcycles, moped, and buses gain in number.

To be fair, the impact of the other vehicles is still relatively small. Cars and commercials are 96.2% of registered vehicles, down from 97.4% in 2004.

And people are driving less per person. Despite roughly 7% population growth since 2004, traffic volumes are stable.

(note there’s no up to date figures on vehicle/kilometres traveled on all roads. The series stopped in 2009 with 2007 figures – thanks government cuts)

People are searching out public transport as well. Despite the myth that no-one travels by public transport in Auckland the number of passenger journeys has risen by 30% in the past six years and equates to 45 trips per Aucklander a year. That’s not a touch on Wellington as a proportion of trips, but it’s significant growth. Another adaption is, perhaps counter-intuitively, that people are keeping their old cars longer. Denialists often say that, if there is a peak oil problem, people will just buy new, more fuel-efficient cars when the price of petrol gets too high. In fact, people find more of their transport budget eaten up by fuel and have less for capital investment -ie buying cars) – 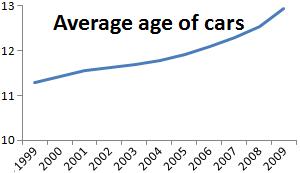 (they also have to divert money from their other areas of spending).

They don’t upgrade to newer, more efficient models, they keep their cars longer, buy cheaper old second-hand cars and if they do buy a new vehicle it’s likely to be a cheap, fuel-efficient partial replacement like a motorcycle or moped so that they can keep their gas guzzler in the garage more.

So, we’re reacting as individuals and families – as the options provided to us by the government and the market allow.

The problem is the government isn’t reacting. It’s spending $1 billion a year on new highways. All these projects either don’t make economic sense according to NZTA’s own models, or only make sense if you assume traffic growth that isn’t happening (and, even if they did make sense, there’s plenty of other things with higher cost:benefits out there). Here’s an example of the government’s mindset – they still put out a monthly publication called ‘State High Traffic Growth’ and their website proclaims “traffic volumes are growing” when, in fact, their own stats show no growth since 2004.

Where that billion dollars a year of government investment goes is critical. Right now, it’s going on trying to make more long-distance commuting by car cheaper and quicker (and on allowing government ministers to get to their beach houses in Omaha easier). It could be used to build a transport infrastructure that will actually be relevant in ten years time, instead.

With an ever rising portion of our country’s economic output being spent on importing the same amount of oil. We can’t afford to waste a billion a year locking ourselves further into oil dependency. People are trying to change their behaviours. Its time the government helped.