All that is wrong with America’s democracy 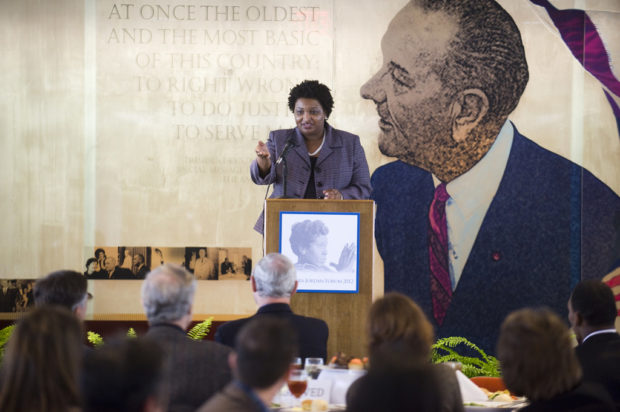 If this was a third world nation the UN would have sent in election observers. Such is the state of American politics and the politicisation of its electoral system as shown by the recent midterm elections.

There are many examples, Texan voting machings flipping votes from Beto to Ted Cruz, the most astounding gerrymandered electorates possible, and the shutting down of polling stations in Democrat strongholds to make it that much more difficult for people to vote. No wonder than even in a good year less than half of eligible voters actual exercise their democratic rights.

But one example really struck a nerve with me. The example was the Georgian governor’s race where the Democrat candidate Stacey Abrams, a black woman, looks like she may have only just fallen short in her attempt to become the first black governor in a state whose history was mired in slavery and where the force of the Voting Rights Act was required to force that state to begrudgingly start to respect that most basic of human rights.

The Republican candidate, Brian Kemp, proudly billed himself as a Trump conservative. He was Georgia’s secretary of state and even though he was a candidate and had so much hanging on the result he continued to oversee the elections in that state. So much for independent and impartial oversight.

From Carol Anderson in the New Atlantic:

Kemp had no intention of relinquishing a post he has held since 2010, and often wields as a weapon to cull Georgia’s electorate. He understood that he would need every trick in the book because he was up against a woman who, in addition to serving as the minority leader of the state’s House of Representatives from 2011 to 2017, founded a formidable voter-registration organization, the New Georgia Project.

Several years ago, Abrams noticed that the state’s demographics were changing quickly, as minorities made up an increasing share of the age-eligible electorate. Abrams noticed, as well, that more than half a million black Georgians were not registered to vote. In 2013, as the executive director of the New Georgia Project, she set out to “register and civically engage the rising electorate in our state.”

When tens of thousands of voter-registration cards poured into Kemp’s office, he heard warning bells. He told the media that “we’re just not going to put up with fraud,” and launched a highly publicized investigation into Abrams’s organization. While accusations of criminality hung in the air, however, he relayed a very different story to his fellow Republicans. Kemp explained to them in 2014 that “Democrats are working hard, and all these stories about them, you know, registering all these minority voters that are out there and others that are sitting on the sidelines, if they can do that, they can win these elections in November.”

Greg Palast has been doing a lot of work in the area tracking Kemp’s actions including publicising the fact that potentially hundreds of thousands of voters were removed from the electoral rolls. His conclusion?

If you do look at the numbers, it’s impossible to imagine that Abrams wouldn’t have won outright if everyone who is entitled to vote could vote. If all the provisional ballots are counted, if all the absentee ballots are counted, I don’t have any doubt about what the outcome would be or would have been.”

And how he formed this conclusion?

Brian Kemp, Georgia’s secretary of state, purged 550,702 Georgians from the voter rolls in 2016 and 2017 — that is, canceled their registrations. I’m not guessing. After much resistance, Kemp turned over the names and addresses of each one of these purged voters in response to a threat of a federal lawsuit (which I filed in federal court in Atlanta and served on Kemp Friday).

Of these, we are certain that 340,134 were wrongly removed, with no notice that they were purged. I want to thank Salon for your report, which went viral, letting Georgians know my foundation had listed all the names of the purged at GregPalast.com. Unfortunately, there were only a couple of days left to re-register, but it appears that thousands did so.

That still leaves hundreds of thousands disenfranchised. If they show up to vote on Nov. 6 — though they won’t get notices of polling places, nor get absentee ballots if requested — they can only receive “provisional ballots,” with little or no chance they will be counted.

How did Kemp pull off this mass purge? He moved voters from his state’s so-called “inactive” list to “canceled,” based on his assertion they had all moved out of the state or out of their county.

But they hadn’t moved. According to a team of experts led by John Lenzer, CEO of CohereOne, 340,134 had never moved at all. Lenzer led a group of the nation’s top “advanced address hygiene” professionals, who use dozens of databases (including deep post office files) to know exactly where every American lives. Our experts advise companies like American Express to make sure you get your bill (or find you if you don’t pay).

As Lenzer told me of the 340,134 Georgians, “They hadn’t moved, and they should not have been removed from the voter rolls.”

How could Kemp assert these voters had moved? Each one was “guilty” of missing the 2014 and 2016 elections, and they failed to return a postcard. The postcard looks like junk mail; most people throw it away. Kemp argues, correctly, that the Supreme Court said states could use this procedure — but only so long as the state had a good-faith basis to believe voters have moved.

Kemp sent the “inactive-to-canceled” list to counties to check the accuracy of the list, knowing damn well the counties don’t have the experts and resources to do this.

The people disenfranchised included a cousin of Martin Luther King who was involved in the original movement to gain the vote back in the 1960s.

There were other administrative ruses.  Like requiring signatures of late enrolees to actually match other recorded signatures.  When this decision was made it was clear that Kemp was just mucking around with people’s rights to vote.

These were not the only underhand tactics that Kemp engaged in.  When it was discovered that the state’s electoral data had been potentially compromised he accused the Democrats of hacking the site.  Wonderful tactics.  Deflect attention from the obvious question, how come he sucked so badly at his job to allow this to happen, with an attack on the other side.

From PR Lockhart at Vox:

In the final days of Georgia’s tight governor race between Republican candidate Brian Kemp and Democratic candidate Stacey Abrams, things are heating up.

Kemp, who is Georgia’s secretary of state and also the chief officer overseeing the election, has been repeatedly accused by Democrats and civil rights groups of trying to influence the results. However, on Sunday, Kemp accused Democrats of attempting to hack the state’s voter registration system — a claim that has rankled Democrats.

“While we cannot comment on the specifics of an ongoing investigation, I can confirm that the Democratic Party of Georgia is under investigation for possible cyber crimes,” Candice Broce, a spokesperson for Kemp’s office, said in a statement on Sunday. “We can also confirm that no personal data was breached and our system remains secure.”

And what actually happened?  Again from Vox:

When Kemp was made aware of the issue, he released the statement accusing Georgia Democrats of trying to break into the system. Democrats have maintained that the cybersecurity experts simply reviewed the websites and did not attempt to hack the state’s registration system.

Election experts like UC Irvine law professor Richard Hasen criticized the allegations and accused Kemp of voter manipulation and engaging in “some banana republic stuff” in a Slate article published Sunday. Georgia Democrats called the probe “a reckless and unethical ploy,” adding that the FBI was being used to support “false accusations.”

And during a Monday appearance on Good Morning America, Kemp’s opponent Stacey Abrams, who is running to become the first black woman governor in the US, argued that Kemp “cooked up the charge, because he realizes, once again, he left the personal information of six million voters vulnerable,” citing previous data leaks during Kemp’s eight-year tenure. Later in the day, Abrams added that Kemp was “abusing his power” by launching the probe so close to the election.

Apart from baseless smears and the mass disenfranchisement of people of colour what else did Kemp do?  He made it as difficult as possible for votes to be recorded in Abrams friendly areas.  Like not providing power.

In Georgia, officials did not supply power cords for their voting machines at a polling site in a mostly African-American neighborhood.

The batteries died and people waiter for hours.

This is voter suppression y’all. pic.twitter.com/ePFVem9WoE

And keeping voting machines under lock and key so that people had to queue for hours to vote.

Another problem was the limited number of voting machines in some locations. More than 1,800 machines sat idle in storage in three of the state’s largest and most heavily Democratic counties. In Fulton County, according to figures provided by elections director Rick Barron, the ratio of machines to registered voters was lower than it had been in 2014, despite predictions that turnout was likely to break records for a midterm election.

While some voters waited in hours-long lines in Fulton County, 700 of those machines sat in stacks in a warehouse in downtown Atlanta, Barron said. The machines were sidelined because they are evidence in a lawsuit alleging the equipment had been exposed to the threat of hacking in 2016.

The federal judge in the case had ordered state and local election officials — including Kemp — and the plaintiffs to weigh the demands of upcoming elections in deciding how many machines to set aside.

In an interview, Barron said more machines “would have made a huge impact on operations yesterday” and acknowledged that “it would have been a good idea” to push for the use of more machines before Election Day.

“The lines were long in the morning and we just didn’t have any machines to throw out there,” he said.

Broce, too, said additional machines “would have really helped with the long lines.”

She blamed the litigation for tying up those machines. One attorney for the plaintiffs, Bruce Brown, called that “rubbish” and said officials could have sequestered fewer machines, or later decided to put some back into service.

Brian Pearce in Esquire called this particular activity election ratf*&king 101 and called Kemp a cheap crook.  It is hard to disagree with him.

There was also the problem that the machines that were in use seemed to occasionally have a major operating fault, flipping Abrams votes to Kemp.

Despite everything that the Republicans did, every low down dirty trick, every administrative action taken because it would disenfranchise Black voters Abrams still has a chance.  Currently Kemp is on 50.3% of the total vote.  If this drops to 50% or below then there has to be a fresh election in a month’s time.  The current number of votes needed by her is 25,622 out of nearly 4 million cast and there are still provisional votes to count.

If Kemp wins then clearly it will be because his actions in wrongly suppressing the rights of people of colour to vote.  If he loses it will be despite this.

But this is the sort of behaviour you expect from a third world tinpot dictatorship, not the leader of the Western World.

On behalf of the rest of the world can I ask America to sort its democratic system out?  There is far too much at stake for the will of the people to be distorted in the way that Kemp and Co so gleefully do.

40 comments on “All that is wrong with America’s democracy ”