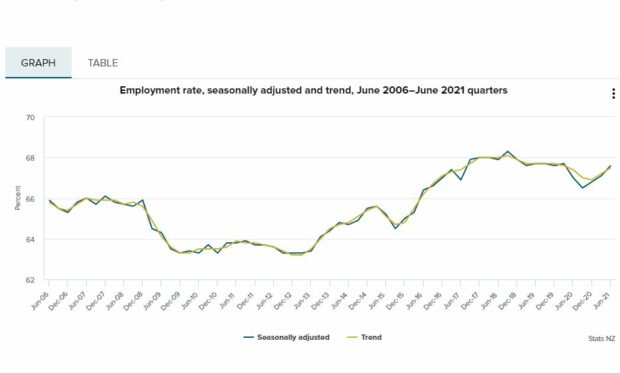 Yesterday one of the most outstanding economic statistics ever in my time on this earth for Aotearoa New Zealand was released.

You would normally think that this sort of announcement, effectively that we are operating pretty well at full employment and that there has been very solid wage increases over the past three months, would be cause for nation wide celebration.  But the media response has been somewhat muted with concern expressed for employers struggling to find workers.

Two weeks ago the Employers and Manufacturers Association were expressing concern.  From Johnathan Milne at Newsroom:

Unemployment is at present estimated at 4.5 percent and trending down. But the Employers and Manufacturers Association argues it needs to be closer to 5 percent, to make it easier to recruit and retain staff, and constrain wage inflation.

Get that?  The EMA wants there to be more unemployment and the associated misery so that salary and wage increases can be muted.

Whatever happened to the market determining rates and conditions?

Meanwhile in Parliament the Government celebrated as shown in this speech by Chris Hipkins:

National purported to find a conscience, asking us all to think about the 190,000 New Zealanders who are still on the job seeker benefit.  The effect was dulled by Louise Upston asking for current unemployed people to be forced to work.

There is a potential downside to this, interest rates may be increased.  Under the Reserve Bank legislation the Reserve Bank has to take into account the supporting of maximum sustainable employment.  Once this is received the Bank’s other mandate, to achieve and maintain stability in the general level of prices over the medium term, becomes dominant and there will be a temptation to increase interest rates to dampen down inflation.

From Hamish Rutherford at the Herald:

While economists were expecting a fall in unemployment – and were already broadly expecting the Reserve Bank to hike interest rates this month – the stronger than expected labour market figures saw the kiwi dollar jump as economists predicted an aggressive series of increases in the official cash rate (OCR).

“The Reserve Bank needs to hike the OCR promptly to get on top of this.”

Both ANZ and BNZ responded to the news by predicting three 0.25 percentage point increases in August, October and November.

The handling of interest rates will pose a challenge to the Government.  There are a lot of highly leveraged first home buyers out there for who interest rates increases will hurt.

This has the potential of bringing into focus the Reserve Bank’s requirement to maintain price stability.  And it highlights the use of imported labour by employers to dampen down wage increases.