At least Labour wants to save the planet

One of the supposedly most contentious things this Government has done is take steps to stop offshore oil drilling.

Shock horror, there was no consultation, it will cost lots of jobs and it is one of the reasons that business confidence is plummeting.

Although stories about plummeting business confidence need to be taken with a certain amount of salt.  As pointed out by the excellent Mediawatch on Radio New Zealand.

Stories about plunging confidence among business leaders just keep on coming – along with economic data that shows no need for panic. Other surveys of opinion about business and the economy tell a different story, but make far fewer headlines.

One of the claims is that the Government’s decision will actually increase greenhouse gas emissions.

Which it might, but only if a number of other nations decide to do nothing but be slow followers.  If every nation steps up and does its fair share to reduce carbon emissions we have a chance.  If a number of nations welch on their obligations we are f&%ked anyway.  The right’s “this will increase carbon output because some idiot in another country will try and make money out of it” is a perfect metaphor for all that is wrong with capitalism

This was not only the firmly held beliefs of the oil industry and the National Party but it has also been something of a rallying cry. For those who still refuse to accept that climate change is happening.

And it is a bit tiring that we are still having this debate. In 2018. Decades after it was shown that climate change due to human causes is an actual thing.

Each year we see the retreat of ice levels at the poles and glaciers. We see more and more intense storms. Cyclone after cyclone.  And we see spreading deserts and failing coral reefs due to warming seas.

Yet still we have to have the debate about how we should not do anything because it may not help.  And the dogwhistle to the science deniers conspiracy freak right wingers makes them laugh loud.  And claim that everything is fine.

But things are not fine.  In fact when the Trump Administration states that we are looking at a near certain 4 degrees increase in global temperatures you know we have a problem.

Let that sink in, according to Trump we should give up doing anything about climate change because it is going to happen anyway. From Chinese conspiracy to inevitability in such a short time.

It’s getting hot in here.

A 500-page environmental statement by the Trump administration predicted that the planet will warm by seven degrees [farenheight] by 2100, the Washington Post reported.

Scientists said the effects would be catastrophic — flooding coastal cities like New York and Miami, causing irreparable harm to coral reefs and generating heat waves that would bake much of the planet, the report said.

The administration, in a draft statement issued by the National Highway Traffic Safety Administration, did not call for cutting greenhouse emissions to avoid the changes, but just the opposite.

The statement, written last month to justify freezing federal fuel efficiency standards for cars and light trucks manufactured after 2020 as proposed by the Obama administration, admitted the plan would increase vehicle emissions but said they’d only be a small addition to the environmental damage that’s already been done.

“The amazing thing they’re saying is human activities are going to lead to this rise of carbon dioxide that is disastrous for the environment and society. And then they’re saying they’re not going to do anything about it,” Michael MacCracken, who served as a senior scientist at the US Global Change Research Program between 1993 and 2002, told the newspaper.

Get all that? It is time to give up.

What has happened to the world’s aspirations?  The IPCC is due to report today that the world can still get under the Paris Accord’s goal of a 1.5 degree increase.  But it will not be easy.

From Umair Irfan at Vox:

The leading international body of climate change researchers is preparing to release a major report Sunday night on the impacts of global warming and what it would take to cap warming at 1.5 degrees Celsius, or 2.7 degrees Fahrenheit, above preindustrial levels, a goal that looks increasingly unlikely.

The report is from the Intergovernmental Panel on Climate Change, an international consortium of hundreds of climate researchers convened by the United Nations. Authors are meeting this week in Incheon, South Korea, to finalize their findings, but Climate Home Newsobtained an early leaked draft.

Why examine the prospects for limiting global warming to 1.5°C? Because under the Paris agreement, countries agreed that the goal should be to limit warming to below 2°C by 2100, with a nice-to-have target of capping warming at 1.5°C.

According to the drafts, the report finds that it would take a massive global effort, far more aggressive than any we’ve seen to date, to keep warming in line with 1.5°C — in part because we are already en route to 3°C of warming. And even if we hit the 1.5°C goal, the planet will still face massive, devastating changes. So it’s pretty grim.

The graph below sets out how difficult things will be.  And it makes it clear that the Trump Administration thinks that there will be no action taken to address climate change. 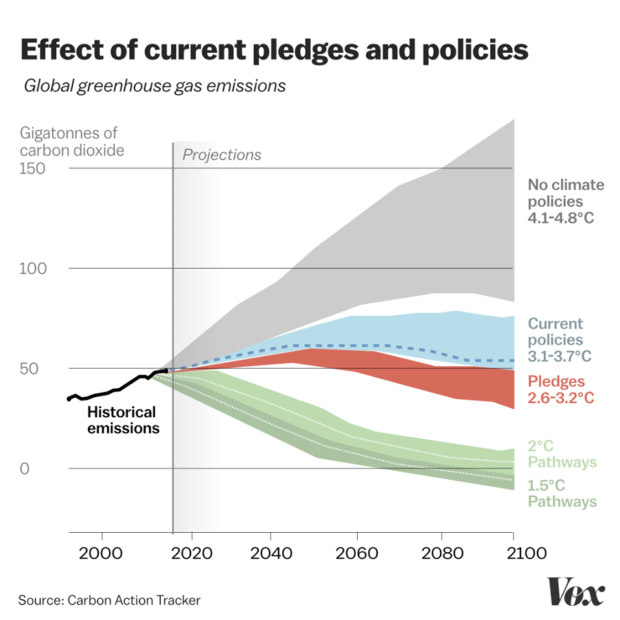 Which is why the current argument of the right, that we should continue drilling because if we don’t then the Chinese may drill more, is so annoying.

If you refuse to give up, if you still think that for the future of our kids and grand kids we should still do something then make a submission on the Government’s Crown Minerals (Petroleum) Amendment bill.  Submissions close on the 11th of October so do not hesitate.  I am sure the right will be rallying its climate change denying intellectual hating supporters to do the same.  But this is an argument that is too important to lose.

46 comments on “At least Labour wants to save the planet ”