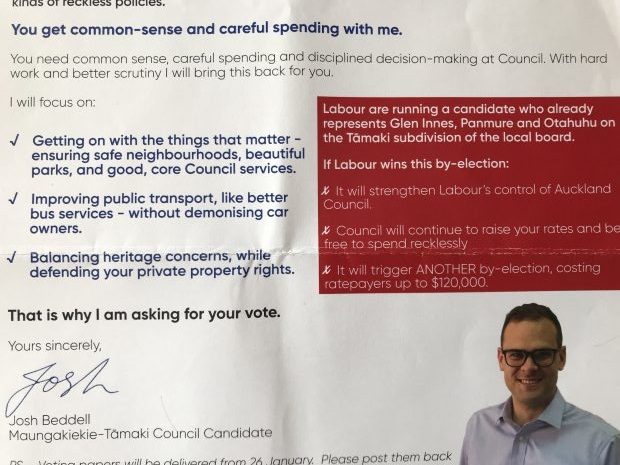 Auckland Council has three, yes three, by elections occurring right now with voting papers to be delivered soon. Two are because Denise Lee and Simeon Brown have been elected as National electorate MPs. The third is because Mark Davey, just elected as an Auckland Future candidate, decided to throw the towel in.  Auckland Future is along with Citizens and Ratepayers an alter ego of National and also an organisation that rather stupidly chose as a candidate someone who had previously stolen the identity of a dead baby.

These are not the only by elections from this term.  In 2016 Botany MP Jami Lee-Ross’s wife Lucy Schwaner attended the first meeting of the Howick Local Board, was sworn in, then threw her toys out of the cot and resigned after not being elected chairperson.

It appears therefore without any doubt that the four Auckland Council by elections this term are the consequence of two people aligned with the National Party being elected to Parliament, one deciding they did not like the job, and one resigning in a fit of pique because they were not made Chair of their local board on their first go.

So what does the new National Party candidate for the Maungakiekie-Tamaki ward of Council do?  Complains that if Josephine Bartley, the Labour candidate, is elected it will trigger a by election and cost the ratepayer.

There are other aspects of his letter to voters that are, how do I say this, at variance with reality.  He claims that Labour has control of Auckland Council.  Sure the Mayor, Phil Goff, is Labour aligned and three councillors, Ross Clow, Efeso Collins and Alf Filipaina were elected on Labour tickets.  But nine of the elected Councillors are (or in the case of Lee’s case were) aligned with National or ACT.

And Beddell is clearly National Party.  He is the joint Auckland Future C&R candidate.  A simple google of his name shows he has been involved in local National Party campaigns for some time.

He is also practising how to talk out of both sides of his mouth at the same time.  He is for good Council services, safe neighbourhoods and beautiful parks but against an increase in Council spending despite the city’s population increasing.  He wants to improve public transport but is against the demonisation of car owners.  If he could point out where this occurs that would help as I can’t see it happening.  Anywhere.  And he wants to balance heritage concerns while defending private property rights.  He is really trying to have a bob each way.

The by elections also present Aucklanders a unique opportunity to have three progressive women elected to public office.

If you or your family live in the Maungakiekie-Tamaki ward please urge them to vote for Josephine Bartley.  She is a lawyer, experienced local board member and current chair and is a really compassionate dedicated representative.  She would be a welcome addition to Council and will start to address the left right imbalance.

With regards to the other two by elections in the Manurewa Local Board area lawyer Brooke Loader is carrying the Labour mantle in an area that should be a stronghold but unfortunately is not.  She would be great on the Local Board as well as a potential Council candidate at the next election.

And in Waitemata former Green MP and City Vision candidate Denise Roche is seeking to fill the position left by the Auckland Future candidate resignation.  Denise was previously an Auckland City Councillor before entering Parliament and her strong experience and community involvement would be a welcome addition to the Waitemata Local Board.

So if you live in Maungakiekie-Tamaki, Waitemata or Manurewa or have friends or whanau live there remind them to vote.  Papers should be delived this weekend.  We have the prospect of replacing three conservative politicians with three progressive women.