It’s almost Big Gay Out time again which also means it’s time for some new images of John Key dancing (if you can call it that) with drag queens and cuddling up to lines of shirtless hunks.

I know I’m supposed to admire the fact that a National party PM would take time out of his busy schedule to be seen with us homos (what a tolerant guy that nice Mr Key is!) but there’s something utterly dishonest about him appearing at the Big Gay Out.

History has a lot to do with this. Key leads a party that has rarely been our supporter and very often our oppressor. I still vividly remember the mid-1980s when the National Party and their supporters tried to kill homosexual law reform. Norm Jones, National MP for Invercargill, famously told us to ‘Go back into the sewers where you come from’.

And more recently in 2004 the Nats overwhelmingly voted against the civil union legislation. Some like Judith Collins conveniently claimed she would have voted yes if it had been gay marriage, the same logic that would see you denying bread to a starving person because it isn’t as good as caviar.

To be fair to our PM, his voting record does contain some gay positive ticks. He voted for both the Property (Relationships) Amendment Act and the obliteration of the provocation defence. But did the public register these as gay-related legislation? Or did Key’s polling tell him he could get away with these votes without drawing any fundamentalist fire?

Polling was certainly in his mind with the civil union legislation on which he voted no. He explained that it was a conscience issue and that’s how the people of his electorate would have wanted him to vote. “Personally I have no problems with Civil Unions” he said but explained “I had done some polling, I wouldn’t say it was extensive, but I did some polling in my electorate and on the basis of that polling I voted against civil unions.”

I interpret Key’s remarks as an insinuation that he wanted to vote yes but had to vote no because his electorate demanded it. And right there we have some classic Key – not quite sitting on the fence (though he’s good at that also) but more a case of jumping down on one side of the fence while eloquently explaining that he’d dearly like to step down on the other but simply can’t for the following excellent reasons. Oh I’d dearly love to give you some rights but those nasty people over there won’t let me, but you still love me right?

Can you blame him for wanting to play this game? For politicians, pursuing legislative advances for gay men and lesbians is a relatively thankless task.

But if he truly supports our rights then why didn’t he vote with his conscience on civil unions? I don’t want to get into a debate over whether a conscience vote should be guided by anything other than, well, one’s own conscience because it’s a complex issue. But if you’re going to vote against your own personal beliefs to follow the wishes of your electorate I would think you’d want more evidence than could be gleaned from some ‘not extensive’ polling.

Why, when asked about gay adoption in 2009 did Key say we have bigger problems, like the economy, and we shouldn’t rush into changing the law? Are human rights only something we deserve in times of financial boom? And I don’t remember this economic test, or the ‘big enough’ test for that matter, being applied to other pieces of legislation. He certainly found time to strip voting rights from prisoners.

We know why Key has talked the pretty talk but won’t walk the walk on gay issues. Because Key isn’t really gay friendly, not in a political sense. He’s saying all the right words but his actions in Parliament are no better than those of Norm Jones. It’s just the same old National in rainbow drag. 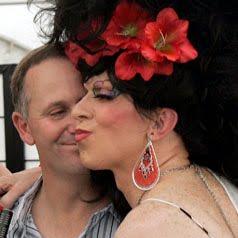 But will you respect me tomorrow?

This is why Key soaking up adulation at the Big Gay Out leaves me crying hypocrisy. Key has done nothing to deserve being greeted like some conquering conservative warrior. Even worse, we’re actually welcoming a man who voted against our interests, who continues to sideline advances in gay equality.

But surely, some will argue, cosying up to him will convert into gay-friendly legislation? Eventually we can win him over! That’s as ludicrous as the other conversion myth. Key’s got us right where he needs us. We’re just a freak show photo op to show the world how ‘everyman’ he is. Key might be good for some gaiety but forget about him delivering us any rights.