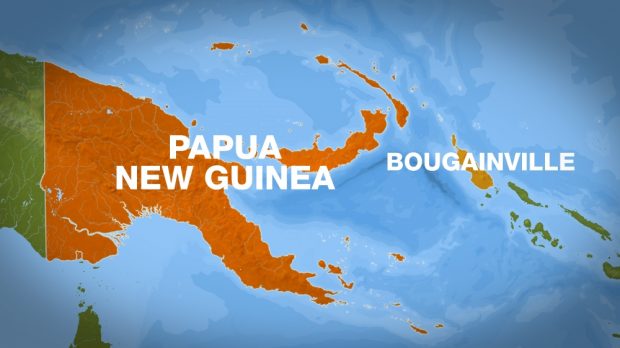 The island of Bouganville has just had a vote towards independence from Papua New Guinea. It’s not binding on the Papua New Guinea state, but it has of course raised expectation state statehood awaits.

That will be a factor in whether Papua New Guinea grants full independence for Bouganville.

Bouganville has been seeking independence since PNG gained full independence in 1975, and Rio Tinto and its Australian counterparts have paid enough royalties to essentially prop up the PNG independence
drive since they got going there in 1972.

As I noted in February this year, this tension between mining riches
enabling autonomy from Papua New Guinea, and remaining part of the
larger Papua New Guinea state, is inflected with the deep virus of the resource curse. The local landowners stand to do well, as do international miner investors. Once discovered, you can’t reverse the impact of resource. There’s no undoing back to permanent agrarian subsistence.

But will full independence actually deliver anything of value to the people of Bouganville other than a fresh flag, fresh military vanity over puffed-out chests, and a fresh set of stamps? Will it make their children better fed, schools have a fresh set of books, public health system increase their health quality of life? No.

If full independence is granted, this brand new state is going to need a huge amount of help to actually form, and dump-trucks of aid cash to be sustained. New Zealand brokered the peace agreement and have a great reputation, and indeed New Zealand Police they have kept order at polling places during the referendum this week. So they may well “invite” us to form their fresh state, and require a decade or two to get it going.

To those in Bouganville, we’re an interesting and successful example of a decolonized state. The answer to New Zealand’s future involvement depends both on whether they invite us, and whether we have the inclination when to be frank there’s little in it for us other than another bottomless pit of aid funding.

2 comments on “Bouganville and Brexit ”