Why is it that UnitedFuture is branded a centre party?

We all know they’re socially right wing, in bed with the Christian fundamentalists, and the tax plan Dunne announced on the weekend proves they’re far-right economically too. They would blow the Budget with $4.6 billion cuts  (no mention of where the money would come from and no-one asked, let’s hope Key doesn’t get such a soft ride when he eventually announces) and most of that money would go on massive cuts to the rich.

UF would spend about twice as much on tax cuts as Labour is but would give smaller cuts for most people; at the same time, if you have a million dollar income, UF would give you a $1600 a week tax break. 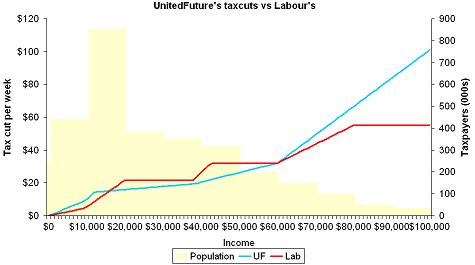 A party of fundementalists who want tax cuts for the rich. Some centre party.