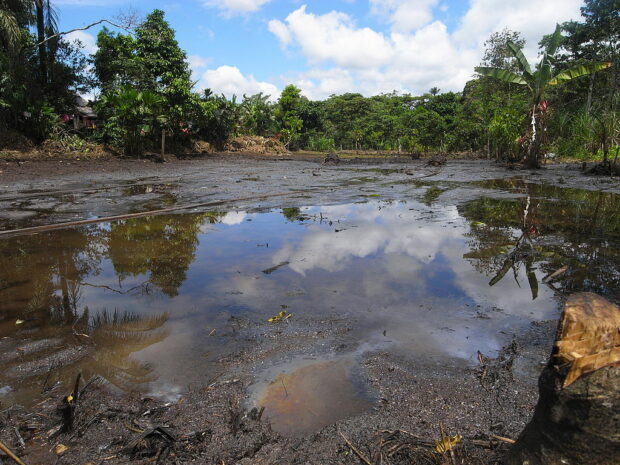 If you need proof that the US Justice system is fundamentally flawed this case, involving the Judicially sanctioned attacks on a lawyer who took on Chevron for destroying habitat in the Amazon forest and causing misery and adverse health effects to the local inhabitants provides plenty.

Chevron’s defence to the original claim was pretty flimsy.  It alleged that Brazilian company Petroblas caused all of the polution and it was innocent.  Nope not one drop of pollution came from its wells.

Wikipedia has this brief description of the background:

Donziger represented over 30,000 farmers and indigenous Ecuadorians in a case against Chevron related to environmental damage and health effects caused by oil drilling. The Ecuadorian courts awarded the plaintiffs $9.5 billion in damages, which led Chevron to withdraw its assets from Ecuador and launch legal action against Donziger in the US. In 2011, Chevron filed a RICO suit against Donziger in New York City. The case was heard by U.S. District Judge Lewis A. Kaplan, who determined that the ruling of the Ecuadorian courts could not be enforced in the US because it was procured by fraud, bribery, and racketeering activities. As a result of this case, Donziger was disbarred from practicing law in New York in 2018.

After having been under house arrest since August 2019 awaiting trial on charges of criminal contempt of court, which arose during his appeal against Kaplan’s RICO decision, in July 2021 US district judge Loretta Preska found him guilty; he was sentenced to 6 months in jail in October 2021.[2] While under house arrest, in 2020 twenty-nine Nobel laureates described the actions taken by Chevron against Donziger as “judicial harassment” and human rights campaigners have described Chevron’s actions as an example of a strategic lawsuit against public participation (SLAPP).[3] In April 2021, six members of the Congressional Progressive Caucus demanded that the Department of Justice review Donziger’s case.[4] In September 2021, the United Nations High Commissioner for Human Rights ruled that the pre-trial detention imposed on Donziger was illegal and called for his release.

There were circumstances which made this case really strange.  From Dharna Noor at Gizmo:

Many factors make the criminal charges against Donziger highly unusual. They were brought not by the state, but by a private prosecutor, Rita Glavin. U.S. District Court Judge Lewis Kaplan, who presided over a 2012 RICO case against Donziger, appointed Glavin to bring the charges after public prosecutors refused to do so, a move previously unheard of in the American judiciary. Further, until recently, Glavin worked at a firm that counted Chevron as a client.

Kaplan also handpicked Judge Loretta Preska to oversee Donziger’s contempt trial, going against the court’s standard process of random assignment. This “allegedly bypassed Rule 16 of the [Southern District of New York] Rules for the Division of Business Among District Judges, which states ‘the assignment committee shall transfer the case by lot,’” the UN working group wrote. Preska serves as an advisor to the pro-business Federalist Society—to which Chevron is a major donor—and has a history of ruling in favor of oil companies in court.

The basis of the charges were primarily that Donziger refused to hand over his laptop, phones and files to Chevron, citing professional privilege and client confidentiality which are very appropriate responses.  He appealed this decision but even though the appeal was pending was charged with contempt of court when he failed to do so.  He spent over two years on home detention, and was not even allowed to go outside for regular exercise.  He was forced to defend the case represented by a lawyer he had a dispute with and was then sentenced to the maximum penalty.

Here are my collated bullet points of some of the matters of concern:

The UN Commission on Human Rights criticised harshly the way he has been treated.  From Gizmodo:

“The Working Group is appalled by uncontested allegations in this case,” six international jurists wrote in the 15-page report that forms the basis for the UN’s declaration. “The charges against and detention of Mr. Donziger appears to be retaliation for his work as a legal representative of indigenous communities, as he refused to disclose confidential correspondence with his clients in a very high profile case against multi-national business enterprise.”

The report goes on to call Donziger’s home detention “arbitrary” and found that it violated provisions of international law including the rights to a fair trial and a fair judge. The body urged the U.S. government to free him and compensate him for the damages.

“Taking into account all the circumstances of the case, the appropriate remedy would be to release Mr. Steven Donziger immediately and accord him an enforceable right to compensation and other reparations, in accordance with international law,” the working group, which is comprised of five international jurists, said.

To be frank this stinks.  The administration of justice needs to be even handed at every branch.  Prosecutors need to be independent and exercise proper judgment on clearly defined criteria.  Judges need to have no particular interest and should be completely devoid of even the perception of bias.

Clearly the appeal courts are going to look at this.  I hope that for the sale of the reputation of the US courts and the need to hold multinational corporations that pollute to task the appeals succeed.