Covid and the media This week there has been some argy bargy between the Twitterati including the Waitakerati and the media on coverage of Covid in Aotearoa.

Laura Walters at Spinoff posted this rather heavy dive analysis of criticism of Covid coverage by the media.

Her introduction was fine.  She said this:

We have heard a lot about the team of five million during the past 18 months. We have heard about the team’s superstars: the healthcare workers, border workers, supermarket workers, contact tracers, scientists and modelling experts. Then there is the team’s corps: those staying at home, scanning in, masking up. But there is another subset of the team whose contribution is sometimes overlooked, and other times misunderstood: those who challenge the government and its Covid-19 response.

I’m talking about those who constructively criticise the government’s Covid-19 response. The opposition MPs, media and experts who ask about issues with PPE supply chains; why more essential and frontline workers haven’t had their jabs (only 40% of police are fully vaccinated; we don’t know what percentage of healthcare workers are fully vaccinated); and how the government is addressing the failings of the MIQ booking system.

Unfortunately, many of those who do play the vital role of questioning the government’s handling of some aspects of its pandemic response are vilified.

The National party has been accused of politicising a public health emergency. And while there have been attempts at political point scoring and the spreading of inaccurate information by the opposition, on the whole, Covid-19 response spokesperson Chris Bishop has constructively questioned the government on legitimate issues. He’s asked about things like the percentage of health workers who are fully vaccinated, and vaccine supply issues.

She then mentioned Tova O’Brien and Jason Walls as being subjected to attacks.  Her comments about reporters questioning the Government’s policies were appropriate but I am afraid she lost me when she defended the National Party.

Her attack against the twitterari was repeated by Andrea Vance in Stuff this morning who said this:

Government supporters aggressively insist critics should shut up and trust the experts. That anyone questioning the prevailing approach is recklessly anti-science, undermining the response or indifferent to a higher death toll.

This is too crude. It is perfectly logical to accept the need for current restrictions, while criticising the Government for how we got here and the failings that led to it, not least in the vaccination roll-out.

Both of their attacks are too crude, to use Andrea’s phrase.  If someone presents a well thought through critical analysis of current policy then my impression is that the left will relish it.  And there are a number of contributors whose writing is critical of current efforts and weaknesses in the system.

For instance Marc Daalder had dug deep into Government information and highlighted significant weaknesses in areas such as contact tracing.  But his commentary is evidence based and nuanced which is a feature that many other writers lack.

Matt Nippert has also written some indepth analysis of Covid and its effects.  His weekend description of Delta is outstanding.  The article contained this passage:

New Zealand had found its first case of Delta on March 9, detected and then trapped and starved of new hosts in managed isolation and quarantine, with a passenger who had flown out of India. It would be five months before it returned here with a vengeance, but our neighbours would not be spared for long.

In April, Delta hitched a ride out of Fiji’s MIQ system and within a month was replicating itself in more than 100 new people each day. And on June 16 in Sydney, a limo driver who worked ferrying international aircrew around the city tested positive for Delta. The case only had five days between being infected and being detected and isolated, but that was enough to seed a stubborn outbreak that would later shatter both inter-state and transtasman consensus on the pandemic.

With similar economies and political systems, and an elimination strategy that had largely been in lock-step with New Zealand, the bubble between the two countries had opened just months earlier in April. Wellington was now watching developments in New South Wales very closely indeed.

On June 23, after a tourist from Sydney tested positive for Delta on his return home, the Covid response experienced what Gerrard calls a “dress rehearsal”.

If you were looking for a sign of official worry about Delta, this was it: The country’s first alert level change without confirmation of community transmission. The mushrooming list of places of interest, and frantic efforts to find and test the more than 2000 people who had also been present, showed the extent to which the response was trying to outrun an opponent that was now faster than ever.

But among the pearls there is this daily onslaught of trash analysis that is not contributing to the debate but instead is undermining it.  And the quality of the commentary is so poor that you have to question its value. The commentary is full of absolute conclusions uninformed by reality like this effort from today from Heather Duplessis-Allan.  Her broad conclusion was:

We thought New Zealand was exceptional. The world raved about our world-leading Covid response. But now, the world is ridiculing us at worst, shocked at best.

Reality would beg to differ. 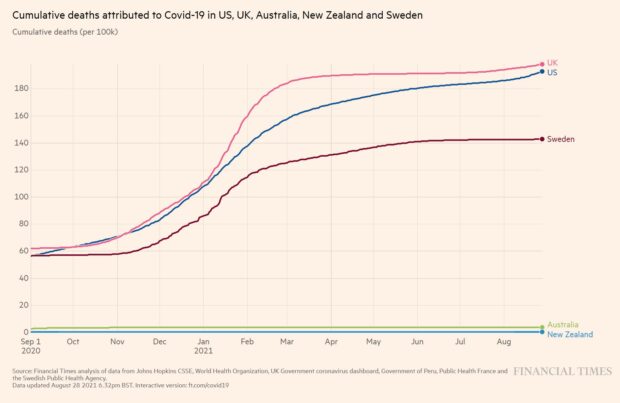 Hers is not the only bad take.  Here are a few examples collected from recent columns:

It seems each week there is an array of partisan critical commentary against the Government’s response to Covid.  And the ease in which the criticism can change makes your head hurt.  One day they are too restrictive the next day to relaxed …

Among the dross there is the occasional gem.  This piece by Shane Tepou is a standout, particularly where he said:

If we did surrender to the virus, we know many, maybe most, of the people who would get seriously ill or die would be Māori and Pasifika. It would be my family. It would be our kaumātua we sacrificed if we listened to the people who say saving lives is too hard. That’s not the Māori way, it’s not the Kiwi way, and it’s a bloody good thing we didn’t listen to the naysayers.Ultimately, getting everyone vaccinated, including kids, is going to be how we break out of this pandemic. Not some arbitrary low target like Collins’ target of 70 per cent of adults. We need to get everyone vaccinated.

Don’t believe the rubbish about our vaccine contracts being slow or the myth based on a blog post that we could have paid more to jump the queue. We chose the gold standard vaccine, and we have been getting it as fast as Pfizer can make it. We now have enough vaccine being delivered that everyone can get their jabs. But we are not there yet, and neither are other countries that pundits would have us believe are “returning to normal”.

And this column by Jevan Casinader where he talks about the need to understand the mental strain our leadership is under is also outstanding particularly where he said:

We’re like five million children squeezed into the backseat of a station wagon, chanting: “Are we there yet?”

When this outbreak began, our narrative quickly shifted from “a world-leading response” to “a failing, poorly-led public service”.

Clearly, there have been gaps in the Government’s Covid strategy. The vaccine roll-out has been slow. The MIQ system remains inequitable. The border has been exposed on many occasions.

But too often, the criticism overlooks the fact that politicians and officials are making imperfect decisions, based on imperfect information, using limited public resources, during an unprecedented global event. There is no textbook for this stuff.

His description of Jacinda Ardern’s use of the 1 pm briefing sessions also resonated:

The prime minister has been accused of exploiting Covid to build her personal brand. I’ve read numerous posts claiming Jacinda Ardern enjoys Level 4 because she can hog the limelight and deliver Labour “sermons” from the Beehive theatrette.

This is daft – and just plain nasty. In February, Ardern said there is an “indescribable anxiety that comes with the daily grind of managing a pandemic”.

Of course the naysayers have the ability and the economic and political incentive to say whatever stupid idea comes into their head.  They are at liberty to imply they understand the handling of a pandemic that has brought more advanced nations to their knees better than those who have spent a lifetime working on health issues.

But they should not complain when the Twitterati or the Waitakereati get stuck into them.

By all means let us have the debate.  But bring your best game and be prepared to defend your positions, particularly the ones damaging to the response.

54 comments on “Covid and the media ”