Covid19 and the Stock Markets In this time of uncertainty when mass unemployment beckons you would expect that stock exchanges would be plummeting. But think again. Because they seem to be doing fine.

Here is a graph of the NZSX over the past 6 months. Bottom line, the market has rallied since the March dip that coincided with the imposition of the lockdown and is higher than it was a year ago. 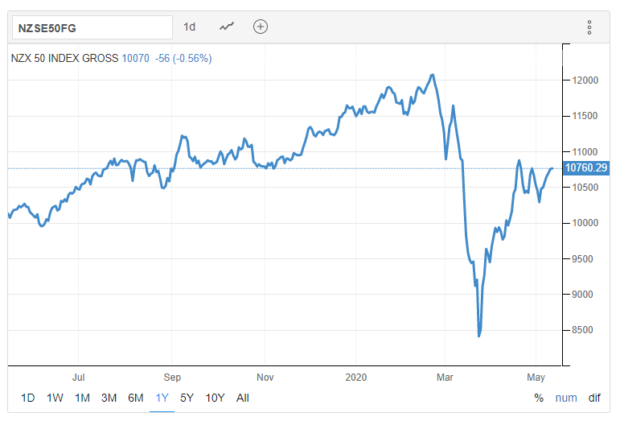 Individual results are mixed. Generally banks and tourism related industries have been hammered, while Fisher and Paykell and Restaurant Brands (read takeaways) have surged. Broadband providers have been doing fine. It is almost as if a big uncontrolled pool of money has sloshed round rather than been drained away.

How about in America where the economy has lost 20 million jobs in the past month. The current rate is 14.7%, and this is the highest since the great depression.

This graph from the New York Times shows how unique and appalling this surge in unemployment is. 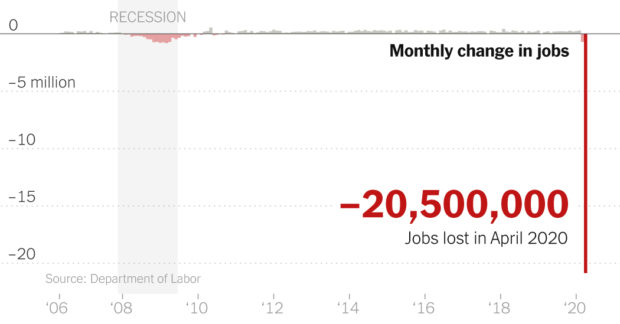 Surely the stock markets would be tanking?

Afraid not, they appear to be rallying and current levels are not far removed from what they were 12 months ago. So what gives? Why would a country with over 1.3 million Covid infections and 80,000 deaths and where 20 million jobs disappeared in April have its stock market rally?

Eric Levits in the New Yorker magazine offers this explanation:

On Thursday, the tech-heavy NASDAQ Index turned positive on the year, while Dow futures jumped more than 250 points following the Labor Department’s report Friday morning. That was just the latest bout of optimism in a bullish stock market run that has taken the S&P 500 up roughly 29 percent since March 23 when investors seemed to be deeply spooked by the very reality that’s now playing out before our eyes: mass unemployment, a shrinking economy, and tens of millions of Americans — the people Wall Street refers to as “consumers” — facing a dire financial outlook.

The rally in equities over the past few weeks has had plenty of detractors. Bears insist that investors are deluding themselves about the plausibility of a “V-shaped recovery,” and/or the insulation of major firms from the consequences of mass bankruptcies. And yet, a growing number of Wall Street investors and analysts have made peace with the dissonance between the markets’ fortunes and their own. In their view, capitalists haven’t lost touch with reality — equity values simply no longer depend on the functioning of society.

He offers this pessimistic prediction:

[Blackrock CEO Robert] Fink reportedly warned that a “cascade of bankruptcies” is about to hit the U.S. That is probably less of a prediction than it is a disclosure, given BlackRock’s centrality to the American political economy (Fink’s firm is managing multiple Federal Reserve’s bond-buying programs). Fink further said that as the leisure and hospitality sectors crater, pressure will grow on Congress to launch evermore sweeping rescue efforts of major firms and small businesses — and that will lead Washington to raise the corporate tax rate from 21 percent back up to 28 or 29 percent in the near future. Meanwhile, the pandemic will leave a durable imprint on the American consumer’s psyche, causing a long-term reduction in travel and the use of public transport. Taken together, Fink’s prophecies suggest that Wall Street’s worst days of the COVID-19 crisis may still be ahead of it.

New Zealand’s problems are much more manageable than those in the United States. But the cognitive dissonance being displayed by investors suggests that capitalism may be in for a rough time.

33 comments on “Covid19 and the Stock Markets ”