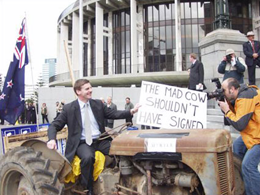 The National Party’s decision to resurrect the idea of a carbon tax is one of the most cynical plays I’ve seen in a while, coming from a party that opposed a carbon tax from day one.

In fact, for all their hollow attacks on Labour’s climate change record it’s been National that has campaigned harder than anyone to frustrate and delay any real action on climate change or force business to pay their own way. This latest about-face merely confirms that trend.

After all, who could forget National’s bitter opposition to the so-called ‘fart tax’ in 2003? Here’s a series of photos from the raucous protest National held outside Parliament, tractors and all. Boy, they made a noise. Bill even advocated pulling out of Kyoto. John Key called it a hoax.

The fact is every move Labour tried to make on climate change was opposed by National, and every time Labour timidly backed down. It wasn’t until Al Gore’s film came along and opened up the political space for them to move that Labour finally introduced the Emissions Trading Scheme, which National claimed it supported when it became clear they needed to look serious on climate change to remain electable.

Now with the election won, National are saying they’ll not only weaken and delay the ETS, but they’re considering dumping the whole thing and starting from scratch with the previously hated carbon tax. No doubt they figure it’ll take another year or two to discuss and consult on, then another few years to phase in – by the time they have to worry about it actually coming into effect it’ll be 2015 and they can start the whole process again.

Let’s be clear. National and ACT don’t really want a carbon tax. Nor do they want an ETS. Many of them don’t even believe in climate change. They simply want to force you and me as taxpayers to continue to pay for business’ emissions. And they will frustrate and delay action for as long as it takes.

For voters who believed Key’s promise during the election campaign that he’d take climate change seriously and keep the ETS broadly as it is this represents a major betrayal. I doubt it’ll be his last.