Die Hard is a Christmas movie 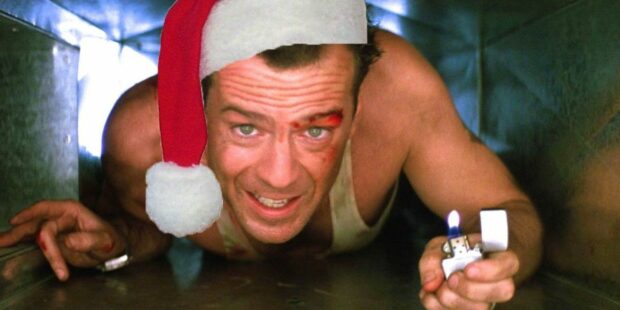 Here at the Standard we choose to debate the important issues of the day.  What needs to be done about climate change, how the Country’s covid response is going (remarkably well and don’t believe the naysayers), and which National faction is leaking and undermining which leader.  But there is one debate that is currently raging that has not yet been addressed …

It is the perennial question raised at this time of year, is Die Hard a Christmas movie?

Google the issue and you get a huge number of hits.  This debate has raged on for years.

One of the more authoritative descriptions I discovered was this post from Kaitlyn Tiffany at the Atlantic:

According to Google Trends, search traffic for the phrase Is Die Hard a Christmas movie jumps every November and December. Somehow, in 2020, there was about as much search interest as there had been in any year prior, despite it being quite clear that Die Hard can be a Christmas movie if you want it to be, it’s fine, and no one cares, or no one would in an ideal world. By January, we will be able to more accurately survey this year’s damage, but I’m not optimistic. This is a sad state of affairs, but what are we going to do? Lecture people about it until they stop? That would be, in its own way, continuing the discussion.

The perennial revelation that Die Hard is a Christmas movie seems to have appeared online for the first time in 2007. A post on Slate titled “‘Now I Have a Machine Gun. Ho Ho Ho.’”—a reference to a key scene in the movie Die Hard—made the case. Through the eyes of Willis’s character, it argued, “the office Christmas party is revealed for what it really is: the fake fun of capitalism, the dying gasp of another pointless year.” In an instance of multiple discovery, the same idea appeared again just two weeks later, in a blog post for The Guardian titled “My Favourite Christmas Film? How About Die Hard.” (Fine!) Over the years, guys saying this online became a trope, to the point where there were T-shirts, and to the point where BuzzFeed’s Katie Notopoulos had to beg, “Stop Saying Die Hard Is Your Favorite Christmas Movie,” in 2013. Yet there was nothing to be done. A huge spike in “Die Hard Christmas movie” tweets and search traffic arrived in 2016, when a British magazine ranked Die Hard No. 1 on its list of the best Christmas movies ever and a British newspaper then published a rebuttal titled “Die Hard Is Not the Best Christmas Movie.” Ever since, the fight has been a yuletide tradition (and a marketing opportunity).

My totally unscientific take based on nothing more than my own personal belief that Die Hard is indeed a Christmas movie is that most lefties think that it is, and many right wingers refuse to accept such hysterical nonsense because their belief of what a Christmas movie is involves sticking to tradition and not veering from it one little bit.

According to them any movie in which the immortal phrase “Yippee Ki Yay mother fucker” is used cannot ever under no circumstances be considered a Christmas movie because a traditional Santa Claus would never say such a thing.

I am interested in your thoughts, either in support of my bold and assertive claim that lefties think Die Hard is indeed a Christmas movie, or to rubbish my admittedly dreamt up in a moment of reading twitter theory that lacks completely in proper analysis.

And Meri Kihirimete one and all.  Look after yourselves and your Whanau.

33 comments on “Die Hard is a Christmas movie ”