And this week has a new winner. And not a National politician or someone with links to one of the major political parties but someone who has really been making a doofus of themselves lately.

I was thinking of awarding it to Mike Hosking for his strange claim that planners are taking his right to own a car away but there was someone who said and did something even more idiotic than this.

There is this retrograde campaign in Auckland that opposes the construction of bike lanes.  Apparently bike lanes are evil things, designed to drive local businesses into ruin, uproot trees and destroy neighbourhoods. And the proponents of these devil spawn infrastructure projects are adherents to Agenda 21 which is according to some a United Nations Communist inspired campaign to take over the world and take our liberties from us.

If you want to comprehend the full extent of the craziness check this website out.  The picture below and text show how strange things are in agenda 21 land. 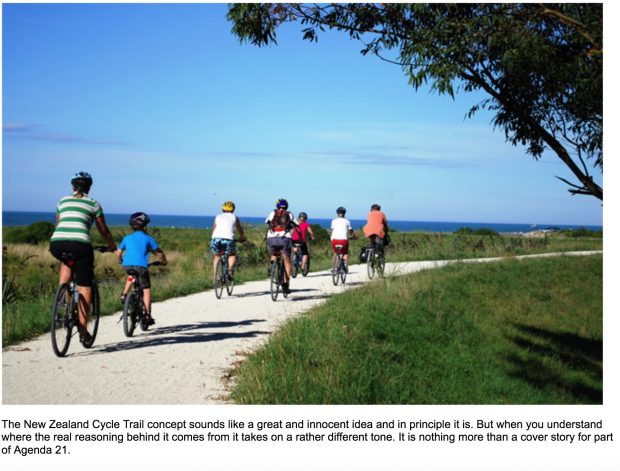 The trouble is Agenda 21 is actually something quite benign, something really positive, a movement hoping to create a more sustainable world. It had a major influence on Waitakere City’s Eco City concept. Of course we should look after the environment and build communities. What could possibly be wrong with this?  And shouldn’t we be building cycleways everywhere in preparation for a post carbon world?

Things became particularly crazy this week when Doofus of the week winner Lisa Prager decided to attack a half finished bicycle lane with a hammer.  From Stuff:

Police have arrested an anti-cycleway protester who attacked an Auckland traffic island using a crowbar and sledgehammer.

Point Chevalier resident Lisa Prager was arrested about 2.30pm on Thursday for wilful damage after she started demolishing the traffic island on Surrey Crescent, Grey Lynn.

The island, installed by Auckland Transport (AT) last year as part of a new cycleway, was unsafe, she said.

“Auckland Transport have done nothing so I have taken matters into my own hands,” Prager said.

And she is not reluctant to express her views.  Again from the article:

Prager believes transport and roading changes being made by AT are “designed to assist multinational corporations to transfer public money into private hands via confidential contracts”.

Alternative transport lobby groups like Bike Auckland and Generation Zero along with blogs like Greater Auckland were a part of a global conspiracy called Agenda 21, she said.

The whole incident was recorded by David Farrier for posterity in a series of tweets:

auckland’s cycleway debacle is escalating daily. this is lisa and she appears fed up: pic.twitter.com/gjuoSmT03W

lisa is very good with a sledgehammer pic.twitter.com/c1iEfhaRdS

“sorry boys, the game is up”
let lisa loose on more problems. i’m into this. pic.twitter.com/csHDRZwroh

The Spinoff analysed her sledge hammering technique and concluded that it was not as good as Farrier thought it was.

Jordan Williams, Penny Bright, Lisa Prager… I don’t remember voting a single one of these self appointed crusaders for us.

FWIW henceforth I am the People’s Popular Taxpayers Union. We’ve split from that other lot.

Agenda 21 is a non-binding action plan of the UN to depopulate the world through the propagation of lycra bicycle shorts. Wake up sheeple.

Oh my. Lisa Prager of Occupy Garnet Road has now accused me of being in league with Agenda 21. Wake up sheeple! https://t.co/ghpeaN7l7R pic.twitter.com/C7EEmMawFR

Message to @prager_lisa from my 5 year old and 7 year old after watching you. “We like cycling with our dad on cycle lanes, and we think you’re crazy.” https://t.co/XXJOh96qP3