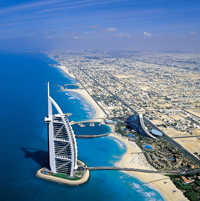 In the US, they built ‘exurbs’ in the Californian high desert, two hours each way from LA; rows of McMansions bought by people who couldn’t afford them whose lifestyles were dependent on cheap petrol*.

In Dubai, they built skyscrapers in the desert; golf courses, swimming pools, even indoor snowfields in a land with no rivers; fake islands off the coast of a near empty country. All of it with borrowed money. Dubai is a monument to the triumph of humanity’s ability to dream over its ability to see sense.

The country has natural gas wealth but its boom was fuelled by the boom itself, a construction bubble that drew in engineers and builders demanding more construction. And it’s all coming crashing down. The skyscrapers and the artificial islands were built on borrowed money (imagine an oil and natural gas rich-country living so far beyond its means that it has to borrow). Then the bottom dropped out of oil and natural gas prices and the world financial crisis hit. The companies have stopped coming, new skyscrapers sit near-empty.

The state-owned construction company, Dubai World, is in enormous trouble. It announced it won’t be meeting its debts of US$59 billion for six months. It remains to be seen whether Dubai will be able to restart payments at that point or whether it was simply the furthest date they could ask for without triggering all out panic.

Dubai’s effective partial default on its debt has already been compared to the collapse of Lehman Brothers last year, which turned a rapidly worsening situation into a full financial meltdown. The world markets are already wavering. Maybe a good time for the Cullen Fund to bank its gains from this year’s bull market and put its money in bonds and cash (specifically Euros and USD, ride the flight to quality).

What Dubai shows is that under the veneer of recovery created by government stimulus programmes, the fundamental economic problems that caused the recession as still unresolved. Many people have been predicting a ‘w’ shaped recession. We may already have passed the middle apex and Dubai is the signal of the second descent.

*(check out Yasha Levine’s accounts of life in subprime Victorville)