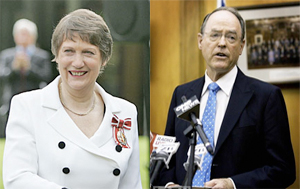 I was stuck recently by the contrast between the (most recent) ex leaders of the Labour and National parties.

Helen Clark stood down on the night of the 2008 election. She soon had a new job heading the UN Development Programme. Still popular with the public she was voted the greatest living New Zealander, and listed as one of world’s 100 most powerful women.

On her recent trip back to NZ Clark received two honours, the Order of New Zealand (our highest honour), and an honorary Doctor of Laws degree from the University of Auckland (in recognition of her contribution to New Zealand). Media coverage also stressed Clark’s high profile role (“Clark takes the world in hand”), and her comments on some aspects of current issues (“Discussing mining on TVNZ’s Q&A programme, Helen Clark said: ‘Some things are more important than money'”).

Don Brash stood down in 2006, one step ahead of a coup, amidst swirling controversy over lies and dodgy dealing during the 2005 election campaign. He dropped out of public sight until 2009, when he resurfaced as the Chair of the Government’s 2025 Taskforce. As soon as the first report was released it was evident that the Taskforce was a farce and a waste of taxpayers’ money. The Government disowned it. Analyst Rod Oram tore it to shreds, not just for the findings, but for the quality of the work (‘At every point it has unbelievably facile analysis and, in fact, substitutes rather generic assertions for detailed analysis’). Even Garth George came out calling for the report to be recycled into toilet paper.

Don’s most recent mention in the media was for calling voters “not only venal, but ignorant” – a statement which tells us much more about Don Brash than it does about NZ voters.

In short, comparing the post-leadership careers of Clark and Brash is a study in contrasts. Clark’s has been stellar, Brash’s an embarrassment. But the world of difference between these two leaders is much clearer with the perfect hindsight of 2010 than it was when they were locked in a tight electoral battle in 2005. My point is, I guess, that there can be huge variations in the skills and personalities of our leaders, strengths and weaknesses that are very real, but not necessarily obvious to everyone at the time. Like G W Bush, a weak leader can be immensely popular, until events and the emerging perspective of hindsight show them up for what they are. Something for John Key to ponder perhaps, as unemployment rises and the much touted wage gap with Australia grows…