From the NY Times:

This Halloween, the Glindas, gladiators and harem boys of the Castro Ãƒ¢Ã¢â€š¬” along with untold numbers who plan to dress up as Senator Larry E. Craig, this year’s camp celebrity Ãƒ¢Ã¢â€š¬” will be celebrating behind closed doors. The city’s most popular Halloween party, in America’s largest gay neighborhood, is canceled. The once-exuberant street party, a symbol of sexual liberation since 1979 has in recent years become a Nightmare on Castro Street… [read on]

And on a related note from Miss Cellania:

A new townhouse development in Toronto put up a billboard showing what kind of community they expect to attract. Someone who goes by the name Defy added cartoon balloons to each, voicing what the neighbors were thinking already. The street art has already been removed, but the pictures are on the net forever. You can see the whole thing in detail at Dead Robot. 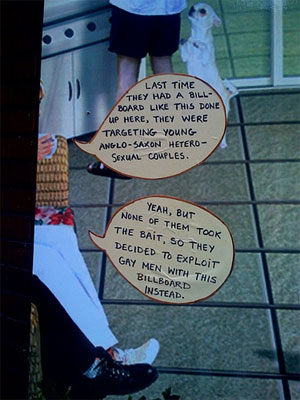