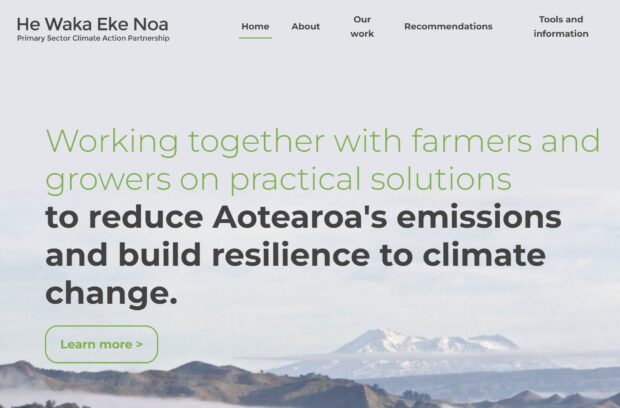 The He Waka Eke Noa report has been released and is recommending the introduction of farm-level split-gas levy on agricultural emissions with incentives to reduce emissions and sequester carbon.

The anticipated savings are very small.  It is anticipated that the framework and pricing system will lead to an estimated reduction in methane emissions of between 4 and 5.5%, depending on the availability of technology options.

Existing Government proposals are expected to result in the sector’s methane emissions reduction reaching the Government target of 10%.

The proposal has drawn various responses.

Dairy NZ and Federated Farmers are cautiously supportive.  But Groundswell thinks that the proposal is a disaster and will put farmers out of business  Farmers should be allowed to do what they want because some farms overseas are even worse.  If this is the test it is well and truly a race to the bottom and humanity has no chance.

There have been other responses to the release.

James Shaw is in an invidious position.  The Green’s response is direct and rather scathing.  Their media release says:

“The number one priority has to be reducing emissions to meet the targets and ensure a safe climate for future generations, but it’s not clear if or how the sector’s proposal will do that,” Green Party agriculture spokesperson Teanau Tuiono said.

“We know many farmers and growers want to do the right thing for the climate, but it’s not clear that the sector’s proposals will actually help them shift to low emissions and regenerative farming practices.

“It looks like the sector has missed an opportunity to come up with a solid plan. It’s like they were given a hallway pass and used it to wag class.

“The report itself admits that further work is needed on many of its key proposals. Time is fast running out for the climate. There are only eight more lambing and calving seasons before the 2030 methane target deadline.

“The Green Party’s view is that agricultural emissions pricing needs to effectively lead to emissions reductions. We can’t rely on unrelated freshwater policies, increased forestry, and reducing methane emissions in the waste sector.

“Government Ministers now have a formal decision-making process to go through. Cabinet will need to weigh up advice from many different sources and we’re all waiting for the independent Climate Change Commission’s assessment later this month.”

Given that changing climate is already resulting in an increasing frequency and magnitude of extreme weather impacts, with droughts, floods, storms, etc. already being experienced in many regions, the farming sector has more to lose than most from the ever-increasing atmospheric concentrations of greenhouse gas emissions.

“It seems surprising therefore that these recommendations for pricing emissions and incentivising their reduction are not far more ambitious.”

Greenpeace was even more scathing and have labelled the report an absolute lemon.  Spokesperson Christine Rose has said:

“The purpose of He Waka Eke Noa is clear: to obfuscate and delay real action on agricultural emissions. He Waka Eke Noa gives a free pass to intensive dairying, while penalising less intense farming operations like sheep and beef farms, and Māori owned farms, who will pay more than intensive dairy. The agri-industry partnership is like a cartel, protecting its own interests at the cost of everyone else, and the planet,” says Rose.”We all deserve a stable climate, healthy rivers, and safe drinking water. But industrial agriculture, especially intensive dairy, is condemning our rivers, climate and health to contamination, pollution and chaos. Action to reduce agricultural emissions means tackling the dairy industry – New Zealand’s worst climate polluter – and that means far fewer cows, it means cutting synthetic nitrogen fertiliser, and it means backing a shift to more plant-based regenerative organic farming.”

The Government response is cautious.  Damien O’Connor and James Shaw response is:

We will take time to carefully consider the report along with the upcoming advice from the Climate Change Commission on the proposals. The sector and the wider public will have the opportunity to provide their view before Cabinet makes final decisions towards the end of the year on how to effectively price emissions,” Damien O’Connor said.

“We are all committed to pricing agricultural emissions to ensure their reduction from 2025, and reiterate that commitment today.

“It’s really important that we get this right. Customers around the world are demanding higher levels of sustainability in the products they buy, so there is the potential for real competitive advantage here if we can get this right and continue moving to sustainable farming systems that are ready to respond to a warming world.

The Green Party will place Shaw in a uniquely invidious position.

The politics are interesting.  The proposal is very modest but there are a number of farmers who will resist.  How Luxon handles dissent from the farming lobby and within his party will show how committed he is to addressing climate change.