The case for the Puhoi to Wellsford Holiday Highway just got even worse. Before, officials reckoned it would return net benefits worth ten cents for every dollar spent. Now, the cost will equal the benefits – if traffic volumes double in 15 years. Problem is, traffic volumes in Northland are flat or falling in the Peak Oil Age.

It’s actually worse than that. The Puhoi to Warkworth segment will supposed have a 1.5 benefit:cost ratio if traffic volumes double (NZTA grades anything below 2 as a “low” return on investment) but Warkworth to Wellsford will have a BCR of 0.6. That’s right, for every dollar you sink into it, you get 60 cents worth back. That’s worse than what you can expect from SkyCity’s pokies.

And both these crappy returns on investment are based on an unrealistic model for traffic growth. The amount of traffic matters because the main ‘benefit’ of the Holiday Highway is meant to be getting trucks from Northland to Auckland a few minutes faster, avoiding congestion they would face if the existing road had to handle double the traffic. But, if that congestion never materialises, neither does the value in having a new highway alongside the existing one.

Here’s how traffic volumes are tracking in Warkworth with NZTA’s assumed 2026 volume for comparison to the trends: 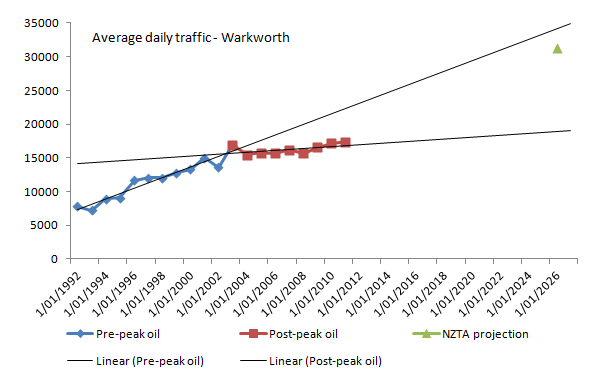 NZTA’s modellers seem to be working with a pre-peak oil model, wherein traffic growth will continue permanently and swiftly. In the real world, however, traffic volumes are stagnant. How bad does the BCR get if you cut the traffic volume in 2026 by 15,000 – in line with peak oil reality?

As for the second segment up to Wellsford. If you didn’t think it was a waste of money already: 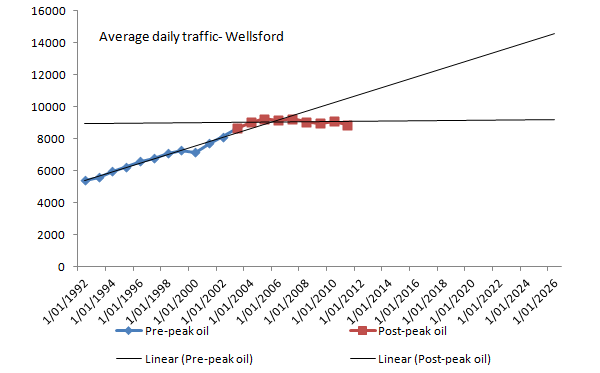 If you live up in Northland, it might be nice to have a billion dollar highway down from Wellsford to Warkworth, and a $760m one from there to Puhoi. But, we live in a constrained world – we don’t have money and resources for every option. The traffic volumes shown in those graphs are pretty typical for the main drag in a small town astride a state highway, and they’re not growing significantly.

I’m afraid that highways that are only just worth their own cost of construction if miraculous traffic growth is assumed ought to be one of Bill English’s ‘nice to haves’. There are more effective uses for that money that will help more people.