I see the NBR lost another 6% of its circulation last year, so I thought it was worth giving Matthew Hooton’s latest rant in that publication a wider audience. Hoots has a go at us and Clare Curran for criticising the violent rhetoric of Sarah Palin and the Tea Party. Apparently, holding people accountable for what they say is restricting free speech.

Alas, Ms Curran rather undermined her apparent commitment to pluralism with a recent post, following the shootings in Arizona, entitled “Time to see through the right-wing politics of hate”. The union staffers, anti-capitalists, warmists, and other leftists who blog at The Standard followed, with claims the shooting was somehow caused by Sarah Palin and the Tea Party

OK. Where to start?

I love the term ‘warmist’ – it means that we think that emitting massive amounts of known greenhouse gases into the atmosphere will increase the greenhouses effect, warming the globe and changing the climate. I know. What a crazy notion. It’s obviously all a conspiracy to take more of your hard-earned pundit pay, Hooty. Tell me, what other conspiracy theories do you believe in?

For the record, the first post on The Standard linking the violent rhetoric that Palin and the Tea Party have introduced (or re-introduced) into American political discourse to the most deadly US domestic political violence in generations preceded Curran’s by two days.

Both Curran and The Standard writers just followed the talking points of the far left in the US, but went onto claim that similar “politics of hate” were being practiced by the right in New Zealand. Something, they suggested, needed to be done”

Well, I know I didn’t read any leftwing US source before writing that first post. I don’t take my talking points from anyone. 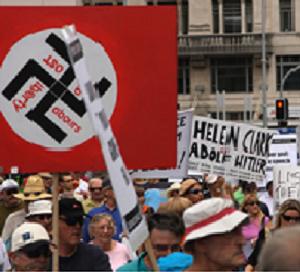 Similar politics of hate is being practiced in New Zealand – you do remember, Hoots, saying that Helen Clark was going to ban the free press and cancel the election, don’t you? You remember giving grist to the paranoid minds who paraded in Queen St comparing Labour to the Nazis? You remember your buddy Farrar’s campaign comparing Clark to various dictators, surely. Now, we have a new far-right group publishing racist leaflets in Christchurch.

And I don’t see Curran, myself or anyone suggesting that anything “needed to be done” in the sense that Hooton is implying. I don’t want to ban Palin and the Tea Party from saying what they say, I want them to be held accountable in the court of public opinion for the consequences of what they say.

And partly so that the numerous hack rightwing propagandists like Hooton wouldn’t be able to spout their lies without response. As for Clark’s regime being hate-filled – tell that to the families that benefited from Working for Families, higher minimum wages, and record low unemployment. And I would hardly describe smile and wave’s outfit as friendly – the friendliness lasts only as long as you don’t ask any real questions.

Ms Curran and her fellow travellers have revealed that they continue to have a fundamental problem with basic concepts of personal responsibility and free speech.

Most alarming, given Ms Curran may one day hold high office, is that if she really believes political speech is so dangerous it can cause mass murder, presumably she hasn’t yet given up on Labour’s long-term dream of restricting it.

I’m not going to speak for Clare but a) obviously some political speech can cause mass murder, a failed painter from Vienna proved that, and b) Labour has never tried to ban free speech, no-one was prevented from voicing their views by the Electoral Finance Act.

Labour and its friends appear to remain ignorant of basic democratic principle. For that reason only, they deserve to be crushed by Mr Key and his allies this November.

I think the 3rd floor would describe us as frenemies 🙂 And we’re not ignorant of two key democratic principles – freedom of speech and public accountability of political actors for their words, their actions, and their consequences.

So, Hooty, now that you see the “only reason” the Left deserves not to win at the election isn’t a reason at all, I’m sure you’ll be bringing your fabulous propaganda skills to the good guys’ side.