I’ve been holding off on writing anything too heavy in the past few weeks, because it seemed like we’ve all had enough going on. But then I started watching the bigger picture flow of news and heard in passing today about the cost of flood damage from recent storms up North. The clean up happening while trying to contain an outbreak of a very contagious disease and process the intensity of a terrorist attack. Kia kaha Aucklanders.

That right there is the way the world is now. We won’t have covid outbreaks and supermarket knife attacks every week, but we’re past the time of those being rare events, and we’re in the time of synchronous and overlapping crises. Being able to manage the continuous heavy is one of the areas where we need to upskill. We need proactive pathways that both mitigate and adapt, and we need to learn how to adapt and thrive under conditions we’re just not used to.

At this dystopian moment, I’m just not feeling it, and I don’t think I’m alone. I have many friends and colleagues who study extreme weather, in academia, government and the private sector. I think I can speak for many of us when I say we’re stunned.

The nonstop, compound environmental disasters of this summer alone — the fires, heat waves, droughts, floods and hurricanes — would probably have been enough to shock us. But they also come after a year and a half of a pandemic. Even worse, they come atop an ongoing crisis for our democracy that is preventing us, as a nation and a species, from effectively meeting any of these challenges.

I know this is an unhelpful attitude. And notwithstanding all the bad news, there is, simultaneously, tremendous positive momentum on climate. The President and a Democratic majority in Congress are taking the issue more seriously than ever before, and the infrastructure and budget reconciliation bills offer a potentially historic opportunity to make investments in clean energy, climate adaptation and climate justice that start to take the scale of the problem seriously. The youth climate movement is energized and inspiring. Flat-out climate denial is waning.

In the big picture, the climate problem is, in principle, solvable. With existing technology and resources, and sufficient collective effort and political will, we, the human species, have what it takes to modify our energy system to minimize future warming and adapt to protect those most vulnerable from what can’t be prevented.

Solving the climate problem requires not just trust in science, but shared values and a will to collective action for the common good. These are all in short supply. That scares me, way more than the carbon dioxide in the atmosphere does.

There’s no benefit in giving in to “doomism,” either about climate, per se, or politics. The only rational response is to do what we can do, within the boundaries our individual and collective circumstances impose upon us, to make positive change.

Speak out, organize, give money, vote.

Let’s all get to it, however we can.

My feeling here is that New Zealand has the potential to be world leading, not even so much on conventional governmental climate action (although how gratifying would it be if we managed that), but because of our team of five million approach to the pandemic. We have the shared values and collective will, and  have been extraordinarily fortunate to have Jacinda Ardern as Prime Minister through these years. That model of cooperative action is an export the world desperately needs.

On the debate about Delta Level Two and ongoing restrictions affecting the hospitality sector. Eighteen months into our covid repsonse, it’s time we started adapting for the long haul. We need to create sectors that can not only survive this pandemic, but the next and the other synchronous crisis, instead of hanging on for some mythical return to normal. One of the keys to that is positive adaptation.

It’s a small example, but it’s the leading edge of how to use crisis as opportunity, and to solve multiple problems in ways that enhance rather than simply mitigate.

Here it’s pairing covid response with the much needed climate action shift away from personal car use. Add tree planting to that vision and the multiple benefits include increased biodiversity, micro climate cooling, and increased well-being from having nature in our immediate environment. Now is also the time to be planning a lot more outside green spaces, everywhere, and rethinking cities as infilled and crowded. 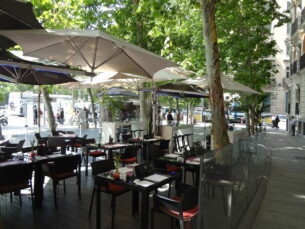 So, Wellington City Council, have the meeting with hospo people about covid, but make sure that the rewilding, permaculture, and car-free movement bods are in the same room.

As always, if you want more on what is working and what helps, use these tags: