Houston and the cost of sprawl

The Right’s favourite sprawl example at the moment. Sections for $50,000. Wow! But they haven’t asked why new sections in Houston are so cheap. They’ve just assumed its because Houston doesn’t have tight zoning rules. In fact, they do – but their rules encourage sprawl. And, while the land may be cheap, it means much higher living costs – particularly transport.

Take a look at this graph: 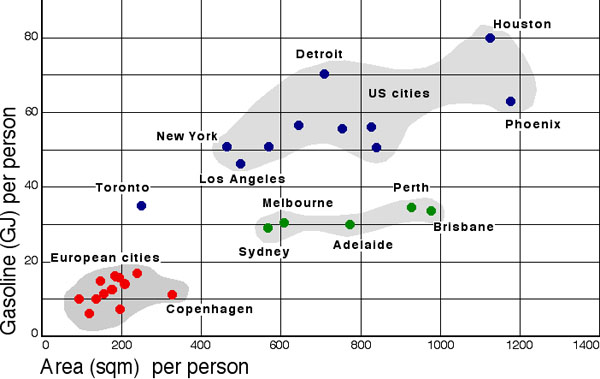 New Zealand’s use is 25 GJ of petrol per person a year.

So, Houstonites are using more than three times as much petrol per head as us and its inextricably linked to their sprawl. If you’re all spread out you’ve got to drive further.

If New Zealanders used so much petrol, it would add $5,000 a year to the average household’s annual bill.

And the price of petrol has been rising at an average of 8% a year for a decade.

So the cost of sprawl in terms of energy use is massive. Add to that the cost of all the motorways, which spend most of their time largely empty and heavily congested for a couple of hours a day (Houston has the fourth worst congestion in the US – you just can’t build enough roads to get ahead of the traffic demand generated by sprawl on that scale) Houston is partially hedged against that rising cost – it is the centre of the Texan petro-state – the world capital of oil. When oil prices rise, there’s more work and higher incomes in Houston, which counters the higher cost of petrol (which is lower near the Texan oil fields anyway). Auckland doesn’t have that hedge.

The cost of burning more petrol. The cost of building more roads (and leveling existing houses to do it). The cost in transport time on congested roads. All those transport costs are costs that a person takes on when they buy a section on Houston, or in any sprawled city. Yes, the price tag on the land might be cheap, but the cost of owning it is anything but.

51 comments on “Houston and the cost of sprawl ”