With Benjamin Netanyahu now reinstated as Prime Minister of Israel, the big annexation of the Jordan Valley is gathering momentum.

Before I go any further, I like Israeli people. And I’m Catholic, so One Day Jerusalem, One Day.

What he has proposed is to bring the Jordan Valley from the Sea of Gallilee to the Golan Heights under full Israeli control. Here’s the plan in summary.

Now, in this conflict there are plenty of historic maps that are designed to mislead or lie to prove one propaganda point or another. This isn’t an argument about cartographic misrepresentation. My standpoint for Palestinian restrictions within the West Bank is from right now, provided by the United Nations in detail here.

President Trump had his own plan and announced it late last year. Here’s some commentary on his plans’ supposed “enclaves” and how they would be connected.

This is the partition proposed under the Trump peace plan: 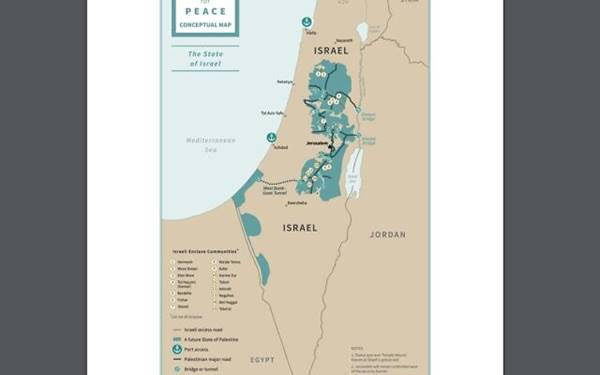 Among many distressing things, what bugs me most is two things.

Firstly to state the obvious that it is an incredible violation to have land taken off you by the state. No matter what the reason. To bring it to home, near Hamilton there are a number of property owners who are having land taken off them and due to high betterment are not getting actual compensation for this loss from the state. It is a sufficient wrong that the Minister of Lands Eugenie Sage is going to have a look at the legislation.

One may ask: how dare I compare Israel with the Waikato. But we need to bring state land annexation home to us.

Israel’s proposal is better considered as an invasion by non-military means. This is clearly a state that covers itself with a gossamer of democratic mandate (three hung elections in succession), so that it appears to be doing something civil, lawful, peacable. In 1863 our Parliament passed the New Zealand Settlements Act, which took hundreds of thousands of acres of land off Maori without compensation. The damage of this state-driven annexation has taken us 150 years to amend and will probably take a further century to get to some equanimity for us all let alone Maori.

You can see a sketch map from Te Ara of the whole thing here.

On my own passageway wall I have one of the handful of copies of the four more detailed maps drawn up within that legislation to take that land with simple lines surveyed across the centre of the North Island. So in New Zealand we are aware of the state using the law to take and to punish. I like to keep it there to remind myself of judicial force and the crimes committed in the formation of New Zealand. Law does not mean justice.

Injustice about land and legacy burns deep and long into future generations.

The second thing that really bugs me is that small-country tyrants are now increasingly emboldened with patronage support. It’s hard to see this kind of policy occurring without Trump in power. We can sometimes get caught in bracketing the Trumpian excesses of the American government as pertaining particularly just to those American shores. But tyranny breeds evil across its client states all over the world. Israel in this action is one of the worst. Here’s an example.

Now, it’s quite possible that this annexation proposal will go the way of so many other plans for the Middle East and be put into the Too Hard basket. That’s not unlikely.

It’s also the case that the direct Palestinian control of anything within Israel was non-existent from 1946 to 1994, and the authority that it gained from 1995 to 2017 didn’t actually change that much. There was some.

But this plan is a totally unnecessary provocation by the state of Israel against an internally displaced people. They need support for their weak position not state-driven attack. The proposed plan is cruel and tyrannical. It would finally and fully separate the Palestinians from Jordan and the land lost in the 6 Day War. It would further alienate Israel from the European Union. It will further enrage the Arabian nations that surround it. It will isolate Israel at the United Nations into an even tighter co-dependant addictive relationship with the United States.

Particularly once Israel passes the necessary legislation for this plan, New Zealand for extremely good historical reasons should speak up against this.