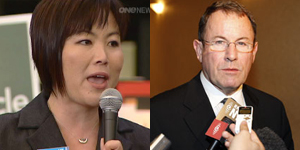 Oh dear. John Banks just stuffed up big time. He’s following in the footsteps of that other spectacular right wing flameout, Melissa Lee in the Mt Albert by election:

A political salvo aimed at wounding the leadership aspirations of Manukau mayor Len Brown is still causing outcry in South Auckland tonight. Last night on the Close Up debate, Banks told Brown he didn’t “want South Auckland replicated across the North Shore and across all of Auckland”.

Brown, Banks’ main rival for the role of Super City mayor said today Banks’ comments were out of line. … Banks is also being criticised by long-time residents of South Auckland.

“I think his comments are very divisive, they are very old fashioned. How on earth can one man lead one city when he has a very entrenched view about South Auckland?,” said Colleen Brown, a Manukau City Councillor.

“I have lived here for 20 years, I love the place, I choose to live here, so do a lot of other people. As a mayor of a city you need to have a political awareness of what to say and what not to say and he he’s alienated a very huge number of people by these comments which is unwarranted in my view.”

This is straight out of the Melissa Lee “Politics For Real Dummies” play book:

Prime Minister John Key wants Mt Albert voters to consider what the Government is doing, rather than focus on local issues as his candidate Melissa Lee’s campaign goes from bad to worse. … Ms Lee, a list MP standing in the June 13 by-election, yesterday apologised for saying a new motorway would divert South Auckland criminals away from the area, a remark that angered many who said she was stereotyping South Aucklanders.

That unwanted glimpse into the depths of Ms Lee’s prejudices effectively killed her campaign, and led to a humbling defeat, a massacre. Lee was abandoned by Key and the party hierarchy, and left to face that defeat alone.

I had a certain amount of sympathy for Lee. None at all for Banks. He’s already confessed that he would be unelectable if he told the truth about his policies. Now he’s made the same bungle as Lee and revealed his South Auckland prejudices. The same bungle deserves the same fate. Banks cannot credibly operate as mayor of the SuperCity.