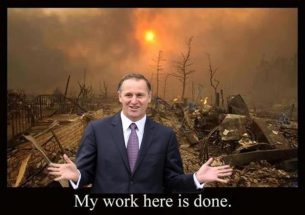 And so it ends – the parliamentary career of the most dishonest Prime Minister New Zealand has ever had. That is John Key’s legacy.

John Key’s lying started long before he entered politics; it just never stopped. The responsibility of being elected to represent New Zealanders, attempting to dignify the privilege of leadership, or even portraying the characteristics required to be accurately described as “honourable” were beyond John Key. Rather, for him, politics and the nurturing of a healthy society was just the same as running a business: keep the shareholders happy, put the boot into the workers, and fleece the punters. Its hardly surprising that since John Key’s premiership New Zealand citizens are now openly referred to as “customers” by National Ltd™ MPs, especially by Key’s replacement, Blinglish.

How John Key was able to serve as Prime Minister for as long as he did defies logic. It seems to come down to the simple fact that most voters, regardless of any evidence to the contrary, actually trusted him to do a good job. That trust was fabricated by a sophisticated, perpetual, orchestrated litany of lies. A sad aspect of that conclusion is the role played by the MSM as an enabler. It wasn’t until the last few months of John Key’s premiership that any serious examination in the MSM was made of how New Zealand, and indeed the world, has now entered a post-truth epoch. Even then, local “journalists” were parroting overseas reports despite having a major vanguard for it right before their very eyes.

Its not like the MSM didn’t have plenty of early warning. A prominent feature of John Key’s lying is that when he’s in trouble, the lies appear in clusters. What might have started as a silly brain-fart gets challenged so, in typical sociopathic CEO behaviour (cf: Donald Trump), John Key doubles down.

Here’s an example going back to 2011 which probably started with a brain-fart but ended with what is perhaps John Key’s most despicable lie . . .

. . . see that last one? Guess what John Key claimed he was so upset about – the death of a New Zealand soldier serving in Afghanistan. This from a Prime Minister who subsequently failed to attend the funeral of another New Zealand soldier so he could have a “family holiday”. (In fact, the real reason John Key shot through on his contrived holiday was to avoid a significant piece of fall-out from his malfeasance around the GCSB matters.)

Given Nicky Hager’s latest revelations concerning John Key’s complicity in a war crime, that last lie of that particular cluster, if at all possible, becomes even more repugnant. Its also abundantly apparent now that more John Key lies will be exposed as time goes on. Such is his legacy.