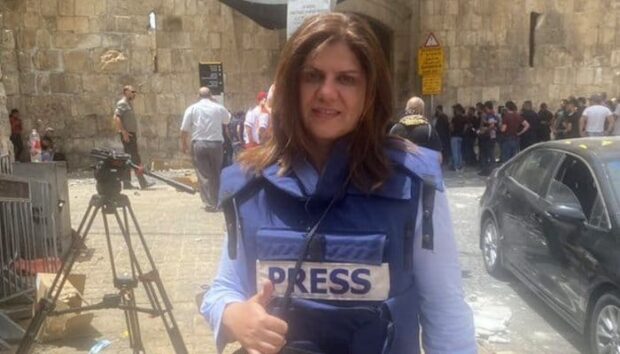 The spotlight is again on Israel after the senseless shooting of Al Jazeera journalist Shireen Abu Akleh allegedly by an Israeli army sniper and on the subsequent disruption of her funeral by Israeli defence forces.

The Guardian provides this background:

Shireen Abu Aqleh, the Al Jazeera correspondent who has been shot and killed in Jenin in the West Bank, was a veteran observer of the Israeli-Palestinian conflict, renowned across the Arab world as an authoritative voice on the region’s most contested story.

The 51-year-old joint Palestinian and US citizen had reported from nearly every flashpoint in the occupied West Bank and East Jerusalem over three decades, during which she regularly crisscrossed between both sides telling the stories of Palestinians and Israelis from homes, battlegrounds and the drawing rooms of leaders.

She covered the second intifada, the Israeli siege of Jenin in 2002, the death of Yasser Arafat, numerous West Bank raids and faltering attempts to find a sustainable peace.

Abu Aqleh was highly regarded throughout the region and seen as one of the network’s pre-eminent talents, whose coverage faced the intense scrutiny of vested interests on both sides of the conflict since she made her on-screen debut in 1997.

Israel has tried to suggest that she was shot by Palestinian fire.  But this has been hotly disputed by Ali al-Samoudi another journalist who was wounded at the same time and by Shatha Hanaysha, a local journalist standing next to her when she was shot.  From Al Jazeera:

Al-Samoudi and other journalists at the scene said there were no Palestinian fighters present when the journalists were shot, directly disputing an Israeli statement referencing the possibility that it was Palestinian fire.

“We were going to film the Israeli army operation and suddenly they shot us without asking us to leave or stop filming,” said al-Samoudi.

“The first bullet hit me and the second bullet hit Shireen … there was no Palestinian military resistance at all at the scene.”

Shatha Hanaysha, a local journalist who was standing next to Abu Akleh when she was shot, also told Al Jazeera that there had been no confrontations between Palestinian fighters and the Israeli army. She said the group of journalists had been directly targeted.

“We were four journalists, we were all wearing vests, all wearing helmets,” Hanaysha said. “The [Israeli] occupation army did not stop firing even after she collapsed. I couldn’t even extend my arm to pull her because of the shots being fired. The army was adamant on shooting to kill.”

Al Jazeera did not hold back on its criticism of Israel:

In a blatant murder, violating international laws and norms, the Israeli occupation forces assassinated in cold blood Al Jazeera’s correspondent in Palestine, Shireen Abu Akleh, targeting her with live fire early this morning, Wednesday, May 11, 2022, while conducting her journalistic duty, clearly wearing a press jacket that identifies her a journalist, covering the Israeli occupation forces storming of Jenin refugee camp in the West Bank.

In the light of the senseless shooting of a respected journalist what is the most insensitive disgraceful think that the Israeli Forces could do?  How about disrupt her funeral and attack her coffin because there were Palestinian flags there?

The claims of stone throwing at forces appears to have as much legitimacy as the earlier claims that she was shot by Palestinian fire.

Locally a plan to light up the Michael Fowler Centre with Palestinian colours was vetoed by Wellington Mayor Andy Foster.

Wellington Mayor Andy Foster vetoed a plan to light up the Michael Fowler Centre in the colours of the Palestinian flag after the Ministry of Foreign Affairs and Trade (Mfat) expressed concerns about Israeli sensitivities.

The projection, driven by Wellington City councillor Tamatha Paul, was to mark a national commemoration of Palestine, and had been ready to go ahead on Monday until Foster took advice from Mfat and was told the act “could be construed as state recognition” of Palestine.

Nakba​ Day, which means catastrophe in Arabic, commemorates the estimated 700,000 people who fled or were driven from their homes in what is now Israel during the 1948 war. New Zealand does not officially recognise Palestine as a state.

Foster stood by his decision on Sunday and said Mfat told him displaying the Palestinian colours could result in complaints from the Israeli ambassador and other Israeli groups. Mfat made it clear it was his choice but strongly urged him to cancel the projection.

I am all for the expression of support for the people of the Ukraine.  The people of Palestine also deserve our support.

30 comments on “Justice for Shaireen ”