Key’s badly dented “political antennae” took another solid beating yesterday, with his second high-profile bungle involving a waitress. This time, thankfully, the waitress was only hypothetical:

Prime Minister John Key has drawn a barrage of criticism after questioning if Labour’s fee free study policy was fair on waitresses who would be paying tax to subsidise students.

His comments also drew a quick response from some critics on social media who drew the link with Key’s repeated pulling of Auckland cafe waitress Amanda Bailey’s ponytail.

Key has made his attitude to waitresses clear, so it was both hypocritical and stupid of him to pose one as an example and invite a revisiting of his ponytail pulling harassment.

Speaking on TVNZ’s Breakfast show Key asked: “How much should the waitress … how much of her taxes should go to a student who will absolutely earn a lot more?”
…
Labour leader Andrew Little said Key should tell waitresses why they weren’t part of his ambitions for New Zealand.

“In reality waitresses – and indeed waiters – will be among the big winners in our Working Futures Plan. It is low-wage workers who are turned off training and study because of the mountain of debt they will come out with.” Like many workers they faced uncertain futures and many would want or need to retrain. “For years the Prime Minister has been telling us he is ‘ambitious for New Zealand’. Waitresses should be part of that.”

An obvious and appropriate response. As is the question for Key – why should the hypothetical worker’s taxes be used to fund roads they may never drive on, services they may never need, excessive politician’s wages and the like (in short it’s a silly game to play).

Henry Maddocks ‏Tweeted “How much should the waitress pay for the salary of the millionaire PM who’s is going to pull her hair?”, while Josh Barr Tweeted: “if all the waitresses are at uni, there’ll be no ponytails around to pull”.

But Key said at his post cabinet press conference on Tuesday: “Well I’m not not going to not talk about waitresses for the rest of the time, I am Prime Minister.”

Keep reminding people of your crappy behaviour and inviting ridicule? Sure, sounds like a great idea to me…

PM: "I'm not going to NOT talk about waitresses for the rest of the time I'm Prime Minister". OK then. 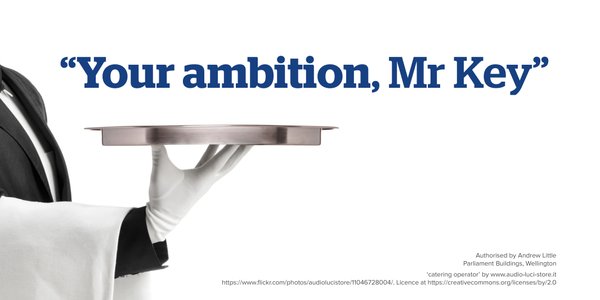