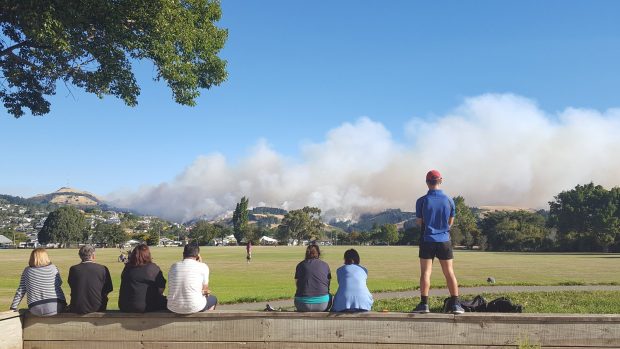 To the residents of Canterbury can I express my hope that you are safe and that you recover from what is clearly a traumatic event.

And can I apologise for getting political about this but the issue is important because our current political system will mean that further disasters like this will occur more and more regularly.

Because it is pretty well inevitable that climate change caused or contributed to the fire.

The predictions are that the effects of climate change will not only be greater overall temperatures but also more severe localized weather fluctuations with the west coast of New Zealand geating wetter, the East Coast and the North drier, and greater wind occurring, just the sorts of conditions to turn the East and North into tinder boxes.

And following last year, which was the warmest year on record, we now have drought conditions in the North and fires in Hawkes Bay and Canterbury.

Rachel Stewart sums up our current predicament well and calls out to all progressives to coordinate our efforts:

My thing is clean rivers. Your thing may be cycling lanes, or overfishing. It doesn’t matter. We’re all out here trying to put out fires – fires that spring up out of nowhere but which necessitate a response.

Head down, bum up we fight the good fight and give our lives meaning at the same time. Except, have you lifted your head up lately and had a good, hard look around? We’re losing our collective and individual battles.

Just about every bit of bad news is directly linked to climate change. Everything. Oh, and the greed of the few who are trying to extract even more before the inevitable breakdown.

Drought in the east of the country needs to be called what it is: the new norm. Irrigation and the building of dams won’t solve that.

She has put out this rallying call:

For a start, it’s time to stop getting caught up in the individual fights and realise that climate change is a mission that must be tackled on a World War II scale. All hands on deck.

We must stop believing governmental and corporate lies about why we can’t economically do such things, or anything. Because, you know, the economy.

We need to wise up to the fact that continuing to compartmentalise our endless individual battles – pay equity, dirty dairying, transport, roading, autism funding, education, intersectional feminism, partisan politics – is a waste of precious energy.

Don’t get me wrong. All are beyond important but, ultimately, unless we tackle climate change and right now, there’ll be no human rights or environment to actually fight for.

The Government’s response has been typical.  Gerry Brownlee chose to respond to the Canterbury crisis by blaming Civil Defence.  Why is everything that goes wrong always someone else’s fault as far as Gerry is concerned?  And just this week as the evidence of dramatic climate change became so clear Paula Bennett claimed that New Zealand is on the right track.  But her Government’s obsession with motorway construction and its refusal to add agriculture to the ETS show clearly where its priorities are and how distorted its judgment is.

What can we do individually?  Some quite simple things will help.  Get a fuel efficient car, catch public transport as often as possible, eat less meat (you will not believe how beneficial this is), take shorter showers and recycle more.  And take less international flights or at least buy green miles to lessen the effect.

Well the future of our world is at stake.  We need to drive every single climate change denier and obfuscator from office.  All of them.  Make sure that people power exceeds the power of oil industry money and the idiotic world views of people who are far too wealthy for their own good.

Locally this means a Labour-Green Government with no room for New Zealand First.

Now more than ever is the time that all good activists need to get active and passionate about their country’s and the world’s future.