Landlords: youse are better off renting 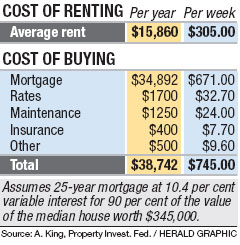 The graphic to the left was produced by the Property Investors’ Federation and was printed unquestioned in the Herald yesterday. The PIF uses the figures to claim Kiwis are better off renting. Here’s what’s wrong with them.

First, it’s comparing the average rent to the cost of buying a median house. Rental properties tend to be lower quality, cheaper – so are likely on average to be worth well below the national median. Comparing apples with apples would look at the rent on properties of the same value.

So, what is the Property Investors’ Federation‘s interest in trying to convince Kiwis they are better off renting? Well, as the name suggests, the PIF is a political lobby group that represents landlords – ie people who make money off others renting from them, people who obviously think that owning properties, multiple properties, is worthwhile.

Why would a group of landlords want people to think renting is better than buying?

Landlord lobby group comes out with flawed figures suggesting renting is cheap just as the Government appears to be developing a housing affordability policy. Funny coincidence that.

28 comments on “Landlords: youse are better off renting”