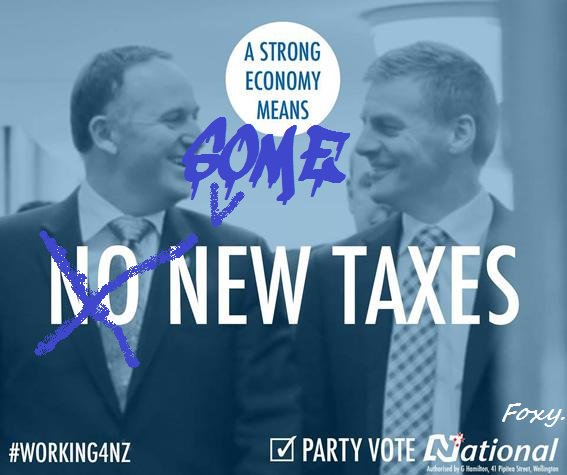 As we reach the business end of one of the most fascinating and most unpredictable election campaigns on record it is becoming increasingly clear what the last couple of weeks will be all about.

National and its proxies will be pressing every button possible to suggest that Labour will indiscriminately raise a number of taxes.

This is the fall back position for right wing parties throughout the world.  If things are going rough then target base greed and use ridicule to turn enough people around.

The first mode has worked well in the past with a pliant media accepting National’s claims at face value.  This time things have been different, with Joyce’s claims being ridiculed by everyone with access to a spreadsheet, apart from the Taxpayer’s Union.  Although if some of the pundits are right and the recent Reid Research poll is accurate we have a lot to worry about the health of our democracy.

All approaches demean the body politic.  The problem is that when people become disgusted with politicians they become disgusted with both camps, so there is nothing for National to lose.  Meanwhile their core supporters celebrate the attack on the state and the verification of their selfish ideology so this is a veritable win win.

And so we have the current National’s onslaught, aimed at turning some swing voters’ prejudice and ignorance.

And as I survey the current campaign my initial response is an incredulous “you have to be freaking kidding” to their claims.

Firstly the claim that Labour is not being straight up with Kiwis.

Here is the really silly thing.  Labour is proposing a Tax Working Group to look at our system and in particular see what can be done about our housing crisis.  It has a couple of bottom lines.  The family home and the land associated with the family home will be protected.  And the bright line test period, introduced by National, will be extended to five years.  Otherwise it wants the experts to consider and make recommendations and then the Parliament will have to decide what to do.

What is this Communist inspired Tax Working Group you ask.  Well National set one up without telling anyone this would happen.  Then they increased the rate of GST and the take by $1.6 billion despite promising during the campaign not to do this.  And they lied claiming that the tax cuts would be fiscally neutral when it is clear the cuts would be anything but.

So Labour is promising to review the tax system and try and do something about the housing crisis and is being attacked for it. Yet National also had a working group, told no one about it, and broke a campaign pledge not to raise taxes.  So can someone tell me why Labour should be vulnerable on this issue?

Secondly the assertion that Labour is going to raise taxes on all sorts of activities.

Labour has announced the following policies:

As for a capital gains tax well in April 2015 John Key said that a CGT was not the answer to New Zealand’s housing crisis.  Nek minnit, in May 2015 we had a two year bright line test CGT.  And National complains that Labour may introduce a CGT?  They did it themselves and they never told anyone they would do this.

And just to keep this debate honest here are the 18 taxes that National never talked about but introduced.  They suggest that Labour has all these malign dishonest plans for tax increases.  From National’s history they clearly have had very malign dishonest plans to increase taxes, at least for the poor citizens of this country.  Here are some of them:

And perhaps they can answer this question.  They claim Labour is going to introduce an inheritance tax. So under the current law if a beneficiary is transferred the former family home, transfers a share to their partner and they then decide to sell it one year after it was transferred to them, do they pay Capital Gains Tax under the bright line test?

Finally the incompetence allegation has already been disproved by expert after expert after expert.  Joyce could not even name a taxi driver who supported his claims.  As a question, why should we even tolerate the thought that someone so incompetent and so dishonest should be returned as our Finance Minister?

It is a worry if our democratic system can be affected by transparent lies that the liars may be returned to power.  Any functioning democracy should be able to rely on political parties having a respectful debate based on truth.

For Bill, it's not about if the tax system is fair. He just wants to scare, w/ lies about us wanting new taxes. Seem a bit hypocritical? pic.twitter.com/SndVBB0ySl

Update: in a smart tactical move Labour has promised no new taxes will be introduced until after the next election.

Tax time lines clarified: working group in the first term, any changes enacted in 2020, to take effect in 2021. https://t.co/Agbq34dvZA