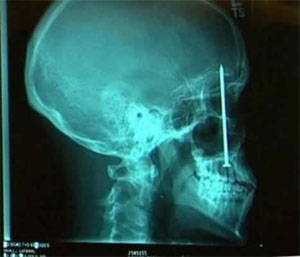 The result seems to be strongly tied to low-level brain activity and suggests that political orientation could be related to differences in how the brain processes information.

The study asked paricipants to tap a keyboard when an M appeared on a computer monitor and to refrain from tapping when they saw a W. Liberals had more brain activity and made fewer mistakes than conservatives when they saw a W.

[R]espondents who had described themselves as liberals showed “significantly greater conflict-related neural activity” when the hypothetical situation called for an unscheduled break in routine.

Conservatives, however, were less flexible, refusing to deviate from old habits “despite signals that this … should be changed.”